Parisian thunderstorms love the Eiffel Tower and yet it’s safe for visitors and the tower’s structure. Let us tell you why.

The Eiffel tower and lightning have a long history. Since its birth in 1889, the monument has "attracted" lightning during storms  – there are on average 5 impacts every year. And yet, this doesn’t affect it, and it doesn’t pose any risk to the public either.

The Eiffel Tower is, by its structure, naturally connected to the ground. Being the highest point in Paris, it’s an easy target for lightning, which tends to take the easiest and quickest route to the earth. Especially since it is made of wrought iron, which is considered a very conductive metal.

Gustave Eiffel had planned it!

However, right from its construction, Gustave Eiffel had planned for everything! He installed 4 lightning rods at the top, like copper brooms directed to the sky. Like in our buildings, these lightning conductors are connected to insulated cables that go down to the ground to ensure the dispersion of electricity.

When lightning strikes occur elsewhere than on the lightning conductors of the summit, they can also reach the top antenna or lattice girders of the structure. When that happens, the lattice structure of the Tower plays a protective role and acts like a Faraday cage, a sort of metal enclosure that directs the energy of lightning to the ground, only through the outside of the building. Fortunately, the public doesn’t access these external beams, so there’s no danger for visitors to the Tower during a storm.

For the preservation and proper functioning of the monument's electrical systems, surge arresters were installed in the electrical panels and copper circuits or cables were added. This is to limit power surges that would disrupt the general operation and also comply with the recommendations of current electrical standards.

These earth circuits are equipped with lightning strike counters that allow the electricians of the Société d'Exploitation de la tour Eiffel (SETE) to carry out a verification of these links as soon as it is deemed necessary.

Nevertheless, the Eiffel Tower is not the only building high enough in Paris to be hit by lightning strikes – far from it! For each storm, this depends on the cloud mass and electrical activity in the sky near the high points of Paris.

Beginning in 2019, the Eiffel Tower will completely renew its food offer, from the Michelin-starred Jules Verne restaurant to takeaway meals. Happiness for the taste buds on every floor.
Works 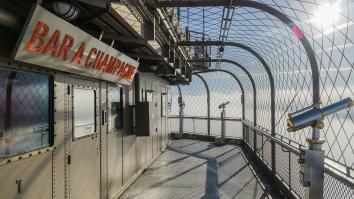 Enjoy unbeatable views of Paris and a bubbly break on the Parisian skyline. The champagne bar is found at the top of the Eiffel Tower.
Events
By browsing this website, you agree to the use of cookies which we will use to compile visitor statistics. Learn more
Tickets for individuals
Tickets for professionals*