The beacon illuminates the Champs-Elysees theater

To celebrate the theatre’s 100th birthday, the beam of the Tower’s beacon is deviating from its course for a few special evenings on April 8th, May 29th and July 5th, 2013.

When the Théâtre des Champs-Elysées was inaugurated in 1913, the Eiffel Tower's beacon had been lighting up Parisian nights for almost 25 years. Consisting of a fixed part producing the most powerful light in the world and a revolving part producing blue, white and red lights, Gustave Eiffel’s beacon had been celebrating the splendour of the Universal Exhibition since 1889.

The beam, which became a familiar sight in the Parisian sky, deviated from its course to salute the opening of a new cultural landmark for Parisians. 100 years later, the Eiffel Tower pays tribute to the theatre’s long and successful life during an exceptional programme offered by Théâtre des Champs-Elysées.

The beam will light up the façade of the Théâtre des Champs-Elysees on:

In 1947, the beacon present since the Tower's inauguration was updated, since the Tower's location was obviously useful for air navigation. A pair of single-coloured beacons was installed, giving the impression of a single rotating source of light from afar.

In 1970, the French Civil Aviation Agency (Agence pour l’Aviation Civile) refused to carry out necessary work caused by a fault, which meant that air traffic was forbidden to fly over the capital, so the beacon was replaced by the red lights normally used to signal factory chimneys.

Reinstalled as a permanent fixture to celebrate the beginning of the third millennium, the two beams of the Eiffel Tower’s current beacon sweep the Paris sky, with a range of 80 kilometres, from dusk to 1 in the morning.

Comprising 4 motorised "marine"–type projectors, they are piloted by micro-computers using specific software and a programmable robot to control their movements. Each one rotates through 90° and they are synchronised to create a double cross-shaped beam pivoting through 360°.

Since the Tower was erected, a powerful beacon has swept the horizon from it’s summit. How does it work? By Bertrand Lemoine.
History and culture 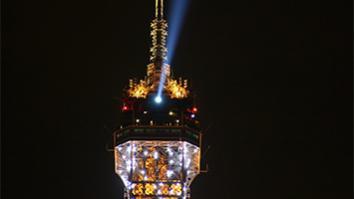 Beacon turned off due to maintenance works until October 10th

Beacon turned off due to maintenance works until October 10th.
Works
Tickets for individuals
Tickets for professionals*