For the submission of the third and final application file of Paris’ bid for the 2024 Olympics Games, the Eiffel Tower was adorned with Olympic colors on Friday, February 3rd. This illumination allowed Paris 2024 Organizing Committee to present the slogan of the Parisian bid: "Made for Sharing".

Indeed, this Olympic bid emphasises notions like sharing, open-mindness and internationalim. Its official slogan is thus in english, with a declination in french: "Venez partager".

The illumination was broadcasted live on Paris 2024’s Facebook page. If you want to watch or replay this illumination: https://www.facebook.com/Paris2024

The International Olympic Committee (IOC) will unveil the host city of the 2024 Olympic Games in Lima (Peru) on September 13th. Let's all support Paris! 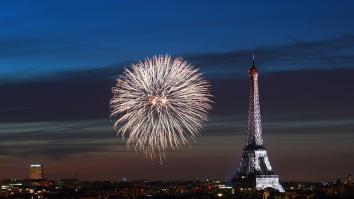 From September 2017, the Eiffel Tower will undergo renovation work and the modernisation of its visitor reception. 300 million euros will be dedicated towards improving and renovating the Eiffel Tower, ensuring the longevity of this most famous of Paris monuments.
Works
Tickets for individuals
Tickets for professionals*