On Thursday 16 March 2017, the Eiffel Tower Vertical® - a race running up the Eiffel Tour against the clock – is back for the third time. Jointly organised by the Eiffel Tower and EcoTrail Organisation, this year there will be 128 runners taking part in the competition (professionals and amateurs) all set to test themselves by running up the 1,665 steps of the monument. This year’s new feature: a series of special events organised on the esplanade of the Tower enabling visitors to experience this sporting feat live while also having a great time!

The goal – for 2017- is to offer the general public the opportunity to watch this sporting and human performance by being as close to the runners as possible. On the evening of the race, the esplanade (free access) will play host to:

- a TV set from a car-podium;
- a warming-up area for the runners;
- a “climbing” event organised for the general public;
- the starting point of the race positioned right in the middle of the esplanade.

See the runners arming up and rest your own limits

This year the runners’ warming-up area will be in the middle of the esplanade. Featuring steppers and treadmills, it will enable the general public present under the Tower to watch the runners getting ready before setting off to climb up the monument steps! A special “climbing” event organised by New Balance – race partner – will also enable the general public “take on the Tower” virtually via steppers connected to a screen!

The race will be shown live on Eurosport 2 from 8.45pm to 10.15pm from the TV set installed under the Tower. On the agenda follow the runners and commentators climbing the Tower, as well as portraits and interviews… Four screens will make it easy for the general to follow the race and the programme.

Watch the race start and the runners during the race

AIn order to let the general public cheer on the runners and see their first few metres close up, the starting point has been changed this year and the runners will leap over a ramp (just like in skiing races) situated in the middle of the esplanade. The visitor on the Tower will also be able to watch the runners on the first and second floors. However, the top, where the race finishes, will be closed to the public during the race.

La SETE represented in the race by one of its employees

La Société d’Exploitation de la Tour Eiffel (SETE) has a wildcard and the members of the Tower Running Club chose Philippe Dubois to take part in the 2017 race and represent SETE with panache, just like his colleague Candido Diaz y Sanchez last year. Philippe, 49, brigade leader in the Tower Visitor Teams, is a seasoned runner with several marathons and trail runs on his CV. He will undoubtedly give everything he’s got in his home race on 16 March! La SETE wishes him good luck for his preparation. His colleagues will be on the esplanade on the evening of the race to cheer him on!

3rd edition
Thursday, March 16th, 2017 at 8 pm
More information on the official website of the Verticale: www.verticaletoureiffel.fr
Opening of the Tower to visitors on March 16
Climbing the staircase: closed, as per usual, at 6pm
Third floor closed to the public at 7.30pm to welcome the beginning of the race
The other floors of the monument will remain open to the general public until 11.45pm ​
Advance sales of tickets online for 16/03 has finished, but visitors wishing to come to the Tower can still buy their tickets at the Tower at the monument’s ticket counters. Access to the esplanade is unrestricted and free of charge (after security checks)

To celebrate welcoming 300 million visitors since opening to the public in 1889, the Eiffel Tower is putting on an exceptional entertainment programme on Thursday 28th September. The perfect occasion to give thanks to those who have paid the Tower a visit over the years, as well ...
Events 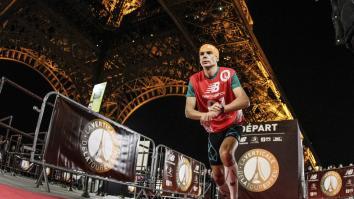 The most original and unusual stair race is back for a 4th edition that promises to be exciting! Which of the 129 runners will climb the 1,665 steps and 324 metres of the Eiffel Tower the fastest?
Events
Tickets for individuals
Tickets for professionals*