A new series of the Diamond Lights is available

Echoing the 300 million visitors who have flocked to the Tower since 1889, "Société d’Exploitation de la Tour Eiffel" has decided to issue a new limited and numbered series of its “Diamond Lights”, stylised in a Venetian red version, inspired by the historic colour of the Tower.

As the 300 items put on sale last year were bought in less than 20 days, SETE has decided to issue a new set of “Diamond Lights” this year for the festive period, in a limited, numbered and “original red” version.

Intended as a genuine decorative collector’s object, the Diamond Lights are being issued in a limited and numbered series of 450 items. The flashing lightbulbs were taken down from the Tower before being riveted on a “soft to touch” mild steel base, a throwback to the puddle iron used by Gustave Eiffel to build the Tower.

In addition to the new colour of the base, the 2017 version also features a silkscreen print bearing the title of “Embrasement de la tour Eiffel pendant l’Exposition Universelle de 1889” (The Eiffel Tower alight during the Exposition Universelle of 1889) based on an engraving by Georges Garen. They are numbered from 1 to 450.

A unique object for a great gift or to treat yourself!

Each “Diamond Light” is unique: it bears the traces of its life on the Tower, brushstrokes and imperfections: all signs of its authenticity. The packaging has been designed to match the authentic and “industrial” nature of the object.

Unique item, rare object, bearer of the history of the Eiffel Tower, the “Diamond Light” is a truly original idea that will delight collectors of authentic items and Eiffel Tower enthusiasts.

Where and how can the “Diamond Lights” be bought?

The 450 “Diamond Lights” will go on sale on Friday 1 December on the website https://sparkling.toureiffel.paris/, each one prices at €540, inclusive of post and packing. Just 450 items will be issued, each one sold with its respective numbered certificate of authenticity.

From April, the Eiffel Tower has a new activity to offer its young visitors on the first level with a fun and educational experience dedicated to children aged 6 to 10. This permanent event gives you the chance to enhance your visit by acquiring new knowledge while having fun, wi...
Events 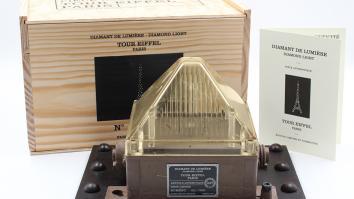 For Christmas, the Eiffel Tower is now selling its “Diamond Lights”, authentic lightbulbs which made the monument sparkle, transformed into decorative collectors’ items. An exceptional piece for collectors of rare objects or those who are passionate about the Tower!
Events