Embarquement towards the extraordinary adventure of the space conquest, with the 1er stage of the Eiffel Tower. 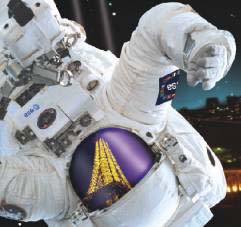 This summer, the Eiffel Tower with the head in stars, with an exposure dedicated to fifty years of space conquest, carried out with the European Space Agency (ESA) and the National Center of Space Studies (CNES).

All began one October 4, 1957 with the launching of Sputnik 1, the first artificial satellite of the Earth, which opened the space era. Today this search of elsewhere also became a means for better observing the Earth, communicating and to study the impact of the reheating climatique.

Through 32 photographs exposed in the open air and several films presented at Cineiffel*, the visitors it is possible to admire the Earth seen of Space and to discover the many technological projections as well as the missions spatiales.

Viewers presenting of the stereoscopic photographs (relief) and the posters in 2D offer the feeling to slip into the skin of the astronauts on board the Space Station Internationale.

To celebrate welcoming 300 million visitors since opening to the public in 1889, the Eiffel Tower is putting on an exceptional entertainment programme on Thursday 28th September. The perfect occasion to give thanks to those who have paid the Tower a visit over the years, as well ...
Events

Celebrate the Chinese New Year in the shadow of the Eiffel Tower!

A parade lead by 16 dancers from the French Association of the Chinese Dragon and Lion Dance will be held on Saturday, January 25, to welcome the Chinese New Year.
Events

From May 20th to June 10th, the Eiffel Tower pays tribute to the famous international tennis tournament of Roland Garros. A giant tennis ball is hitched between the first and second floor.
Events
Tickets for individuals
Tickets for professionals*