Beginning on September 28, the Eiffel Tower will offer a unique exhibition on its esplanade, retracing the saga of its construction. An exhibition that’s free and open to everyone!

The 130th anniversary is something to be celebrated all year long. Following the anniversaries of its inauguration (March 31) and its opening to the public (May 15), the Eiffel Tower is preparing a new highlight for this autumn 2019. Starting September 28, come and discover the free and immersive exhibition that will be offered on the Esplanade.

Why a Tower shaped like this? Why puddle iron? What successive colors? How did they build the Tower so quickly? What would it be like to be the shoes of a worker on the site? This exhibition revisits the entire epic history of its construction in a fun and educational way.

This exhibition will be installed on the Esplanade, under a dome covering approximately 3229 ft² (300 m²). This exhibition, which is open to everyone will offer fun and immersive experiences. Using original scenography and next generation equipment, visitors will be able to test the dizzying effect of walking on a beam above the void below or experience the monument’s wind resistance by blowing on the monitors. How about becoming a Tower painter?  You could try, using “virtual graffiti” technology.

A special treat for the youngest - but also the oldest - who will have the opportunity to play with the shape of the Tower's structure on manipulation tables...The emphasis will thus be placed on innovation and scientific research thanks to a creative and surprising scenography.

A unique exhibition that will allow our visitors to take a step back in time during the 1889 World’s Fair. Access to the Esplanade and gardens of the Eiffel Tower is free of charge, so this exhibition is truly open to all audiences.

Exhibition of the 130th anniversary of the Eiffel Tower
Open every day from September 28 to November 24
Hours: from 10 AM to 8 PM
Location: on the Eiffel Tower’s Esplanade
An exhibition that’s free and accessible for everyone (access by the Eiffel Tower’s South and East entrances)
A project made in partnership with LG and the Caisse d’Epargne Ile de France

And a beautiful book for the Eiffel Tower’s 130th anniversary 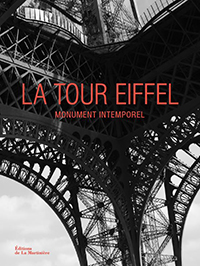 Published by Editions de la Martinière on September 19, a beautiful book addresses the myth of the Eiffel Tower from two perspectives: the great technical challenges that had to be overcome to build it and its iconic influence, both in Paris, France and throughout the world. This distinctly modern book offers, with the help of illustrations from yesterday and today, a two-way reading journey.