In Belle Epoque Paris, an astonishing metal tower rising over 300 meters tall was erected between 1887 and 1889, on the occasion of the 1889 World’s Fair. It would be the tallest tower in the world. A crazy project masterfully led by Gustave Eiffel, an engineer and contractor specializing in metal framework and structures.

Two of Gustave Eiffel’s engineers, Emile Nouguier and Maurice Koechlin had the idea for the Tower in 1884. It took three years to refine its architecture and aesthetics, with the help of architect Stephen Sauvestre, and to set the project up with the organizers of the World’s Fair.

Construction of the Eiffel Tower began in 1887 and was finished in record time for a structure of its size – 2 years, 2 months and 5 days – and stood as veritable technical feat. In fact, the foundations on the banks of the Seine were laid in just 5 months! The Tower was designed and then prefabricated part by part at Eiffel’s factory in Levallois-Perret. At that time, the construction of the Tower was far from being unanimously accepted and many critics, particularly from the world of Art and Literature, spoke out against the project.

Find out more about the birth of the Eiffel Tower

The construction of the Eiffel Tower structure was completed on Sunday, March 31, 1889. On that day, it was inaugurated at 1:30 p.m. while workers were still working on the interior fittings and the elevators hadn’t been installed yet! Gustave Eiffel raised a French flag at the top of the Tower in the presence of the Director of the World’s Fair and some of his employees, and certain personalities from the Government and the City of Paris.

The celebration then continued at the foot of the Tower where Gustave Eiffel paid tribute to his teams and in particular to the 300 workers who built this structure later known as the Iron Lady. At its birth, the Tower was actually red!

Between April and mid-May 1889, work on the Tower's interior fittings continued. On May 15, the World’s Fair began and the Tower opened to the public, without even one elevator yet in operation. It was the heart and main attraction of the World’s Fair that occupied the Champ de Mars, the Trocadero hill and the quays along the Seine as far as the Esplanade des Invalides.

At that time, the Tower was the tallest building in the world, and in the first week, nearly 30,000 visitors climbed the 1,710 steps to reach the top. The elevators went into service on May 26!

The criticism that had accompanied the construction of the Tower burnt itself out, in light of the enormous popular success with which it was greeted throughout 1889. The Tower received nearly 2 million visitors who came during the World’s Fair (which ended on November 6, 1889) to admire this architectural masterpiece but also to feel the dizzying ascent and admire the unprecedented panorama it offered over Paris.

It was the beginning of 130 years of amazement. And it's not over yet!

Find out more about the World's Fair of 1889

Visit with 1,300 Parisian children, Jeanne Added in concert, special light show, etc. To celebrate the 130th anniversary of its opening to the public, the Eiffel Tower has put together a memorable program.
130 years 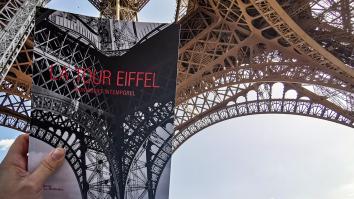 A gorgeous book for the 130th anniversary of the Eiffel Tower

FYI: A gift idea for anyone who admires the Iron Lady! A gorgeous book for her 130th anniversary is coming out on October 10th, published by Editions de la Martinière.
130 years

On May 15th, 16th, and 17th, 2019, the Eiffel Tower celebrated its 130th birthday with an exceptional light show. (Re)discover it through this video.
130 years
Tickets for individuals
Tickets for professionals*