The Eiffel Tower during the 1889 Exposition Universelle

The tenth Exposition Universelle was organised in Paris in 1889, from the 15th May to the 6th November, and it was for this occasion that the Eiffel Tower was built. Stretching over 95 hectares, the Exposition filled the Champ-de-Mars, the Trocadero Hill, and the banks up to the Invalides esplanade, and the Eiffel Tower was at the centre of everyone’s view.

Immediate success for the tallest tower in the world

The 1889 Exposition Universelle received millions of visitors. Amongst them, 1,953,122 came to see the Eiffel Tower, in other words almost 12,000 a day! The Tower was met with immediate success.

From the very first week, though the lifts were not yet in service (they would be from the 26th May), almost 30,000 visitors climbed the monument using the staircase, that is to say 1,710 steps to the top !

At the time, the Eiffel Tower was the tallest tower in the world and people from all countries went to the heart of the French Capital to admire this architectural masterpiece.

The public hurried to experience not only the dizzy heights of the ascent, but above all an unprecedented view over Paris, since no one had yet seen the view from an aeroplane.

The Eiffel Tower has attracted among its copious number of celebrity visitors the French actress Sarah Bernhardt, the Prince of Wales (future King Edward VII) and the Princess of Wales, George I of Greece, le Shah of Persia, Prince Baudouin and other, more unexpected guests such as one certain American: he had long hair, a broad hat and tan-coloured chaps. It was William F. Cody, known by the name of Buffalo Bill. 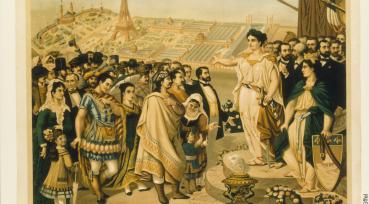 Already festive, the Eiffel Tower lit up every evening with the light of hundreds of gas lamps protected by opal glass cases. A tricolour beacon, housed in the campanile, sent out three signals of blue, white, and red light over Paris (using two mobile projectors mounted on a circular rail at the top). Lastly, the opening and closing of the Exposition were announced every day by a cannon shot fired from the top under the direction of a certain Mr. Chobert, the "harquebusier" of Paris, in his capacity as "qualified associate and medal-holder at the Exposition Universelle".

All sorts of boutiques (sale of souvenirs, photographers’ booths, binocular rental, refreshments) and restaurants opened up on the monument. 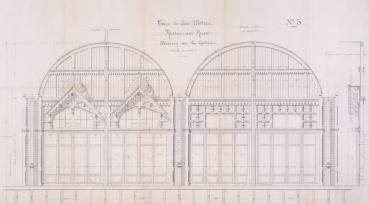 On the first floor, four restaurants were put in, each built in a different style: 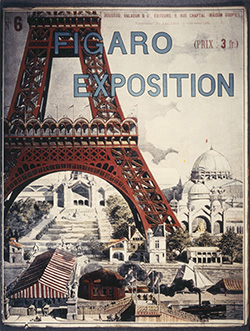 Le Figaro printed on the Tower!

On the second floor, Le Figaro set up a printing works and produced a special edition of the daily newspaper on-site every day. Visitors who bought the newspaper could get their name put in it to "certify" that they had climbed the Tower. The newspaper’s cover illustration showed the Barber of Seville sat astride the Eiffel Tower.

Send your letters by balloon!

An unusual attraction was proposed to the public : send your letters by balloon! In its edition : " Imprimée dans la Tour Eiffel" ("Printed on the Eiffel Tower") on the 29th August, Le Figaro reported: "the Tower’s company is doing its utmost to increase the number of attractions in favour of its clientele. It has just decided to soon put up for sale, on all of the Tower’s floors, small balloons and cheap parachutes arranged in such a way that one can attach a letter to them. The sender’s address will be left blank. We wish the Tower’s parachutes the same success as its postcards! ". Indeed, the Eiffel Tower was to thank for the increasing popularity of the postcard in France, and it was at the request of visitors in 1889 that the Tower's administration put the renowned "Libonis" on sale, named after its famous engraver. The oldest postmark stamped on a postcard showing the Eiffel Tower is the 21st August 1889.

It was in this festive excitement that the first in a long series of achievements was reached on the Tower. On the 9th September, a baker from the Landes climbed the 347 steps that lead up to the first floor on stilts! 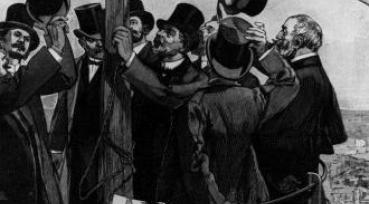 Gustave Eiffel at the top

At the top of the Eiffel Tower, while the public admired the panoramic views, Gustave Eiffel reserved an office for himself in which he received his guests.

Notably he welcomed Thomas Edison there, who offered him his famous "spectacle" class M type Phonograph. The scene, reconstructed, can be seen at the top of the Tower today.

It was also in this office that, on the 10th September during a lunch, he acknowledged the French composer Charles Gounod, sat at a neighbouring table. Gustave Eiffel asked if he would do him the honour of joining his guests. The lunch over, everyone went up to his apartment set up on the top floor for a coffee. The scene was held in good taste, Gounod having been one of signatories of the Artists’ Petition to protest against the erection of the Eiffel Tower!

History of the restaurants

For the Universal Exhibition of 1889, four majestic wooden pavilions designed by Stephen Sauvestre decked the platform on the first floor. Each restaurant could seat 500 people.