The first digging work started on the 26th January 1887. On the 31st March 1889, the Tower had been finished in record time – 2 years, 2 months and 5 days – and was established as a veritable technical feat.

The Design of the Eiffel Tower

The plan to build a tower 300 metres high was conceived as part of preparations for the World's Fair of 1889.

The wager was to "study the possibility of erecting an iron tower on the Champ-de-Mars with a square base, 125 metres across and 300 metres tall". Selected from among 107 projects, it was that of Gustave Eiffel, an entrepreneur, Maurice Koechlin and Emile Nouguier, both engineers, and Stephen Sauvestre, an architect, that was accepted.

Emile Nouguier and Maurice Koechlin, the two chief engineers in Eiffel's company, had the idea for a very tall tower in June 1884. It was to be designed like a large pylon with four columns of lattice work girders, separated at the base and coming together at the top, and joined to each other by more metal girders at regular intervals.

The tower project was a bold extension of this principle up to a height of 300 metres - equivalent to the symbolic figure of 1000 feet. On September 18 1884 Eiffel registered a patent "for a new configuration allowing the construction of metal supports and pylons capable of exceeding a height of 300 metres".

In order to make the project more acceptable to public opinion, Nouguier and Koechlin commissioned the architect Stephen Sauvestre to work on the project's appearance. 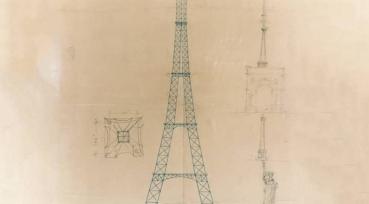 A quite different first edition

Sauvestre proposed stonework pedestals to dress the legs, monumental arches to link the columns and the first level, large glass-walled halls on each level, a bulb-shaped design for the top and various other ornamental features to decorate the whole of the structure. In the end the project was simplified, but certain elements such as the large arches at the base were retained, which in part give it its very characteristic appearance.

The curvature of the uprights is mathematically determined to offer the most efficient wind resistance possible. As Eiffel himself explains: "All the cutting force of the wind passes into the interior of the leading edge uprights. Lines drawn tangential to each upright with the point of each tangent at the same height, will always intersect at a second point, which is exactly the point through which passes the flow resultant from the action of the wind on that part of the tower support situated above the two points in question. Before coming together at the high pinnacle, the uprights appear to burst out of the ground, and in a way to be shaped by the action of the wind". 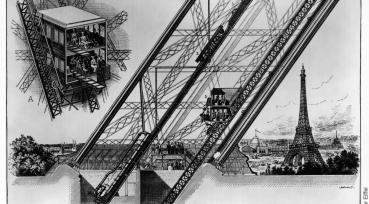 The assembly of the supports began on July 1, 1887 and was completed twenty-two months later.

All the elements were prepared in Eiffel’s factory located at Levallois-Perret on the outskirts of Paris. Each of the 18,000 pieces used to construct the Tower were specifically designed and calculated, traced out to an accuracy of a tenth of a millimetre and then put together forming new pieces around five metres each. A team of constructors, who had worked on the great metal viaduct projects, were responsible for the 150 to 300 workers on site assembling this gigantic erector set.

All the metal pieces of the tower are held together by rivets, a well-refined method of construction at the time the Tower was constructed. First the pieces were assembled in the factory using bolts, later to be replaced one by one with thermally assembled rivets, which contracted during cooling thus ensuring a very tight fit. A team of four men was needed for each rivet assembled: one to heat it up, another to hold it in place, a third to shape the head and a fourth to beat it with a sledgehammer. Only a third of the 2,500,000 rivets used in the construction of the Tower were inserted directly on site.

The uprights rest on concrete foundations installed a few metres below ground-level on top of a layer of compacted gravel. Each corner edge rests on its own supporting block, applying to it a pressure of 3 to 4 kilograms per square centimetre, and each block is joined to the others by walls.

On the Seine side of the construction, the builders used watertight metal caissons and injected compressed air, so that they were able to work below the level of the water. 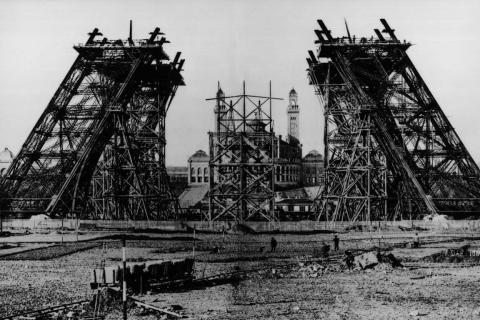 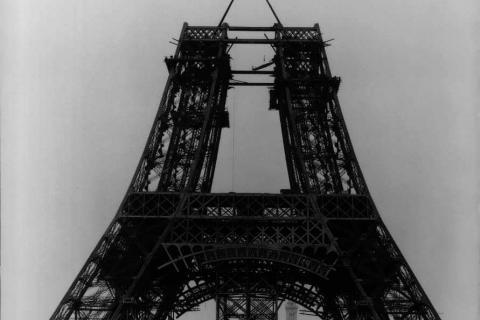 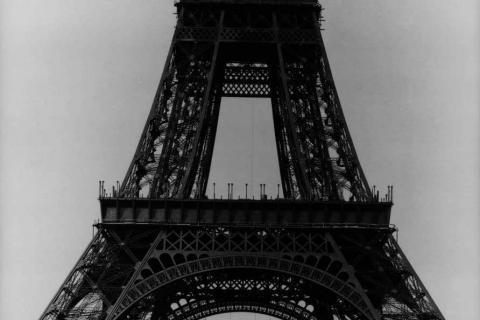 The tower was assembled using wooden scaffolding and small steam cranes mounted onto the tower itself.

The assembly of the first level was achieved by the use of twelve temporary wooden scaffolds, 30 metres high, and four larger scaffolds of 40 metres each.

"Sand boxes" and hydraulic jacks - replaced after use by permanent wedges - allowed the metal girders to be positioned to an accuracy of one millimetre.

On December 7, 1887, the joining of the major girders up to the first level was completed. The pieces were hauled up by steam cranes, which themselves climbed up the Tower as they went along using the runners to be used for the Tower's lifts.

months to build the foundations

It only took five months to build the foundations and twenty-one to finish assembling the metal pieces of the Tower.

Considering the rudimentary means available at that period, this could be considered record speed. The assembly of the Tower was a marvel of precision, as all chroniclers of the period agree. The construction work began in January 1887 and was finished on March 31, 1889. On the narrow platform at the top, Eiffel received his decoration from the Legion of Honour.

Journalist Emile Goudeau describes the spectacle visiting the construction site at the beginning of 1889.

"A thick cloud of tar and coal smoke seized the throat, and we were deafened by the din of metal screaming beneath the hammer. Over there they were still working on the bolts: workmen with their iron bludgeons, perched on a ledge just a few centimetres wide, took turns at striking the bolts (these in fact were the rivets). One could have taken them for blacksmiths contentedly beating out a rhythm on an anvil in some village forge, except that these smiths were not striking up and down vertically, but horizontally, and as with each blow came a shower of sparks, these black figures, appearing larger than life against the background of the open sky, looked as if they were reaping lightning bolts in the clouds." 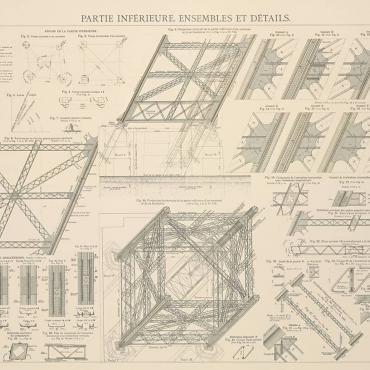 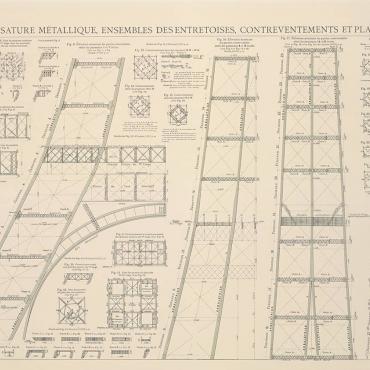 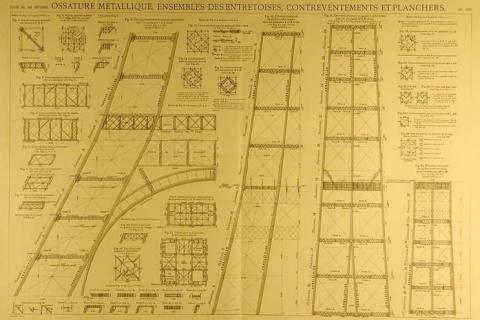 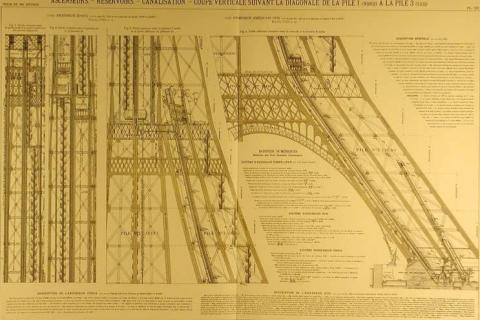 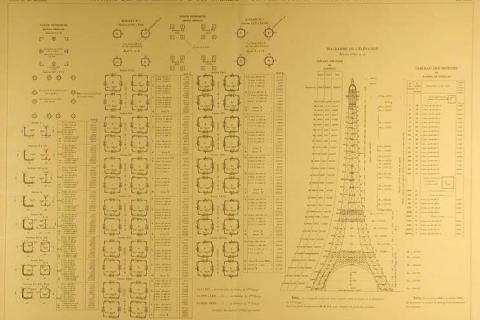 Even before the end of its construction, the Tower was already at the heart of much debate. Enveloped in criticism from the biggest names in the world of Art and Literature, the Tower managed to stand its ground and achieve the success it deserved.

Various pamphlets and articles were published throughout the year of 1886, le 14 février 1887, la protestation des Artistes.

The "Protest against the Tower of Monsieur Eiffel", published in the newspaper Le Temps, is addressed to the World's Fair's director of works, Monsieur Alphand. It is signed by several big names from the world of literature and the arts : Charles Gounod, Guy de Maupassant, Alexandre Dumas junior, François Coppée, Leconte de Lisle, Sully Prudhomme, William Bouguereau, Ernest Meissonier, Victorien Sardou, Charles Garnier and others to whom posterity has been less kind.

Other satirists pushed the violent diatribe even further, hurling insults like : "this truly tragic street lamp" (Léon Bloy), "this belfry skeleton" (Paul Verlaine), "this mast of iron gymnasium apparatus, incomplete, confused and deformed" (François Coppée), "this high and skinny pyramid of iron ladders, this giant ungainly skeleton upon a base that looks built to carry a colossal monument of Cyclops, but which just peters out into a ridiculous thin shape like a factory chimney" (Maupassant), "a half-built factory pipe, a carcass waiting to be fleshed out with freestone or brick, a funnel-shaped grill, a hole-riddled suppository" (Joris-Karl Huysmans).

Once the Tower was finished the criticism burnt itself out in the presence of the completed masterpiece, and in the light of the enormous popular success with which it was greeted. It received two million visitors during the World's Fair of 1889.

An extract from the "Protest against the Tower of Monsieur Eiffel", 1887

"We come, we writers, painters, sculptors, architects, lovers of the beauty of Paris which was until now intact, to protest with all our strength and all our indignation, in the name of the underestimated taste of the French, in the name of French art and history under threat, against the erection in the very heart of our capital, of the useless and monstrous Eiffel Tower which popular ill-feeling, so often an arbiter of good sense and justice, has already christened the Tower of Babel. (...)

Is the City of Paris any longer to associate itself with the baroque and mercantile fancies of a builder of machines, thereby making itself irreparably ugly and bringing dishonour ? (...). To comprehend what we are arguing one only needs to imagine for a moment a tower of ridiculous vertiginous height dominating Paris,just like a gigantic black factory chimney, its barbarous mass overwhelming and humiliating all our monuments and belittling our works of architecture, which will just disappear before this stupefying folly.

In an interview in the newspaper Le Temps of February 14 1887, Eiffel gave a reply to the artists' protest, neatly summing up his artistic doctrine:

"For my part I believe that the Tower will possess its own beauty. Are we to believe that because one is an engineer, one is not preoccupied by beauty in one's constructions, or that one does not seek to create elegance as well as solidity and durability ? Is it not true that the very conditions which give strength also conform to the hidden rules of harmony ? (...) Now to what phenomenon did I have to give primary concern in designing the Tower ? It was wind resistance.

Well then ! I hold that the curvature of the monument's four outer edges, which is as mathematical calculation dictated it should be (...) will give a great impression of strength and beauty, for it will reveal to the eyes of the observer the boldness of the design as a whole. Likewise the many empty spaces built into the very elements of construction will clearly display the constant concern not to submit any unnecessary surfaces to the violent action of hurricanes, which could threaten the stability of the edifice. Moreover there is an attraction in the colossal, and a singular delight to which ordinary theories of art are scarcely applicable".

History of the restaurants

For the Universal Exhibition of 1889, four majestic wooden pavilions designed by Stephen Sauvestre decked the platform on the first floor. Each restaurant could seat 500 people.