SFX at the Eiffel Tower, from 17 April to 1 July

From 17 April to 1 July 2018, try your hand at creating real live special effects on the first floor of the Eiffel Tower, at the “Special Effects: on location at the Eiffel Tower” exhibition

Chroma keying, high-angle shots, and a dedicated photocall... from 17 April you can play at being a professional actor at the Eiffel Tower. In the exhibition space on the first floor, visitors can delve into the history of the Eiffel Tower and the silver screen, and try their hands at three interactive experiences.

Learn about chroma keying, or how to combine reality and make-believe, when you step in front of a green screen and onto a virtual set. On screen, you will be seen walking along one of the Tower’s girders. Don’t forget your head for heights!

In “Make like an acrobat!”, the second activity based on the 1907 silent film by Segundo de Chomón, Les Kiriki, acrobates japonais (Kiriki, Japanese Acrobats), you will experience the magic of high angle shots, a special effect commonly seen in superhero and sci-fi films. Lying on the floor, you can play around with projected images, imagining an endless variety of movements. Your image is captured by a camera, set up way up high with a modified viewing angle. The result? Just like Spiderman, you, too, can defy gravity.

But it doesn’t end there: can’t you hear the photocall? Time for a souvenir snap on a film set. Whether you’re making your big screen debut or already a seasoned thesp, come and slide your face inside a clapperboard frame for a photo. Share your best selfie on social media with  #çatourneàlatour

Worked up an appetite? Head to the bar with its bistro tables and director’s chairs, and tuck in to the cinema-inspired menu with popcorn, pick ‘n’ mix, ice cream, and drinks...
All of the activities are on loan from the “Special Effects: Steal the Screen!” exhibition, on now at the Cité des sciences et de l’industrie.

This year, the Eiffel Tower becomes a cinema

The silver screen is besotted with the Eiffel Tower!  It’s a love story 120 years old. With the paint barely dry in 1898, it drew the eye of the Lumière brothers and Georges Méliès, and since then, the flame has never gone out. To celebrate the unbreakable bond between the Eiffel Tower and the movie world, two further events will bring the Tower to life, in addition the “Special Effects: on location at the Eiffel Tower”. In July, it will be all glitter and red carpet on the first floor terrace. Loungers, palm trees, projectors, cocktail bar... the Eiffel Tower is this summer’s place to be. In autumn, visitors in short trousers will be right at home. To celebrate the October and November release of two animated kids’ films starring the Eiffel Tower, we are running a youth cinema programme.

The Eiffel Tower and the silver screen, a long partnership

A true child star, the Eiffel Tower was yet to celebrate its 8th birthday when the Lumière brothers set up their camera. They placed it in the lift and filmed the ascent through the monument’s metal structure, taking in the Palais du Trocadéro, its plaza and gardens. The film, entitled “Panorama pendant l’ascension de la tour Eiffel (Panorama ascending the Eiffel Tower)”, was the first vertical travelling shot in film, and the Eiffel Tower’s career as a film star was launched.
Even at the Tower’s official opening, there was already talk of filming there: the main inventors of cinema met at the Universal Expo. It was where Etienne-Jules Marey presented the fundamentals of his chronophotpgraphy to Thomas Edison, inspiring him to invent the kinetograph and kinetoscope (camera and viewing device, respectively).

As for Georges Méliès, another pioneer, he made the Tower a star in his Images de l'exposition 1900. And the venerable Eiffel Tower hasn’t stopped inspiring filmmakers ever since. It has even more ties to film, because Gustave Eiffel was a silent partner to the company founded by Léon Gaumont, of Gaumont cinema fame, in 1895.

Throughout the 20th century, the Eiffel Tower appeared in films of every genre, coming to symbolise Paris and France in the eyes of the whole world.
From Zazie dans le métro to James Bond, and The Crazy Ray to Superman, the Eiffel Tower has starred in so many films. Its elegant lines can be seen in dozens of films, with action taking place in even its most hidden recesses, from the underground machinery right up to the top.

It owes its first award to Louis Feuillade and his superintendent Juve, who bravely scaled the monument in hot pursuit of Fantômas in 1914. In 1923, in René Clair’s The Crazy Ray, the Eiffel Tower saves a few lucky souls from the death ray. In End of the World, again in 1923, Abel Gance portrays the end of the world, and the Eiffel Tower, when a meteor strikes.

Since then, the Eiffel Tower has played a symbolic role in many big screen apocalypses, and is often a target for alien invaders. From War of the Worlds (1953) to Mars Attacks and Independence Day (1996), as well as in Men in Black (1997) and Armageddon (1998), the Tower is a big name in sci-fi and fantasy. In 2005, the Tower was transformed into a rocket for Brad Bird’s Tomorrowland, and it was the inspiration for Jacques Tardi and Luc Besson in 2009’s The Extraordinary Adventures of Adèle Blanc.

In film, it is often an objective for climbers: Alain Pol filmed four mountaineers scaling the tower in A l'assaut de la tour Eiffel. A few years later, in 1994, another ascent will remain etched in the minds of young cinephiles: that of Mimi-Suki in Hervé Palud’s Little Indian, Big City.

But really, the Eiffel Tower has always been about romance. In Ernst Lubitsch’s Ninotchka, 1939, inscrutable comrade Garbo finds Paris, champagne and seduction by an aristocratic Latin lover there, while in 1959, Fred Astair meets Audrey Hepburn and her Funny Face at the Tower. The Eiffel Tower has, for the whole world, become a magical place where lovers encounter vertiginous thrills.
More recently, it has even been inspiring Bollywood, and in 2016 it will be used as a location in the rom-com Befikre, the first Indian film shot entirely in France, and Paris in particular.

Whether a brief glimpse swept over by the camera, or a key plot location, the Eiffel Tower boasts more than 100 appearances in films, animated movies, cartoons, TV series, and documentaries. And the film world’s enthusiasm for the Tower shows no signs of abating.

Animation What to do in Paris 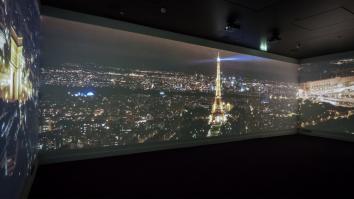 Enjoying the Eiffel Tower in April! 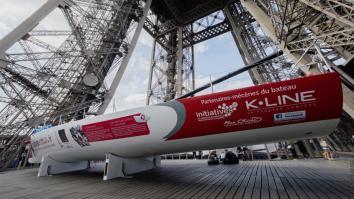 Enjoying the Eiffel Tower in May!

The Eiffel tower is proud to welcome a big-name guest that’s truly one of a kind. The imposing skeleton of a newly discovered species of carnivorous dinosaur will be on show in the Gustave Eiffel lounge from 2 to 4 June 2018 before it is sold at auction. Visitors of the Eiffel To...
Events
Tickets for individuals
Tickets for professionals*