On the night of Saturday 6-7 October, an original light show by ZEVS will bring the Eiffel Tower to life for the Ville de Paris’ Nuit Blanche 2018.

Following on from shows by Sophie Calle in 2012, and Cleon Peterson in 2016, the Eiffel Tower is once again taking part in Nuit Blanche. The Eiffel Tower has handed over control of its lighting system to ZEVS, for a show entitled “Eiffel Phoenix: the obscure clarity that falls from the stars”. The light show is programmed as an extension to the Constellation des Invalides, one of the four installations designed especially for Nuit Blanche 2018.

From midnight to 7am, Parisian night-owls can find a spot at Trocadéro or the Champs-de-Mars and enjoy an original show from the Eiffel Tower’s lighting and sparkling system. The artist’s aim? “To redistribute time and the Eiffel Tower’s electrical lighting”, between deconstruction and construction, making the Tower’s lights “fall” one by one, in the reverse order from which it was built, before restoring them, floor by floor.

It is an original exclusive show for the monument that symbolizes the City of Light, with a musical accompaniment taken from Iannis Xenakis’ Orient Occident (1960). The deconstruction/restoration of the lights will be repeated several times over the course of the night.

When? The night of 6-7 October, between midnight and 7am
Where? You can see and hear the show from Trocadéro or the Champs-de-Mars
Free
Learn more about  la Nuit Blanche 2018 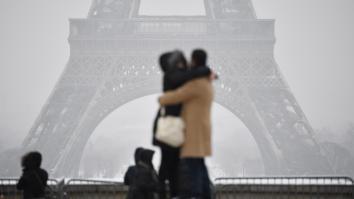 An Unforgettable Valentine’s Day 2018 at the Eiffel Tower

From 3pm to 11.45pm on February 14th, the Eiffel Tower is celebrating that most romantic of days with a special event: An Unforgettable Valentine’s Day 2018. Social media photo comps, competitions, and special offers... There’s plenty going on to delight your soul mate.
Events