On March 31 2022, the Eiffel Tower will celebrate the 133rd anniversary of its inauguration.

There are just a few days between the Eiffel Tower celebrating its new height of 1,083 feet (March 22) and its 133rd birthday (March 31). The monument has just grown 20 feet, with the installation of a new digital radio (DAB+) antenna. What a neat little set of numbers!

After 2 years, 2 months and 5 days of construction works, the Eiffel Tower was completed on March 31, 1889. The very same day, Gustave Eiffel inaugurated the Tower, raising a large French flag at the top in the company of some of his collaborators and figures from the government and City of Paris. The director of the Paris World Exhibition was also present: the “300-meter Tower” would be the star of the Exhibition, scheduled to start several weeks later.

Back on the ground, Gustave Eiffel paid a stirring tribute to his teams and in particular, to the 300 construction workers who built what would become known as the Iron Lady. 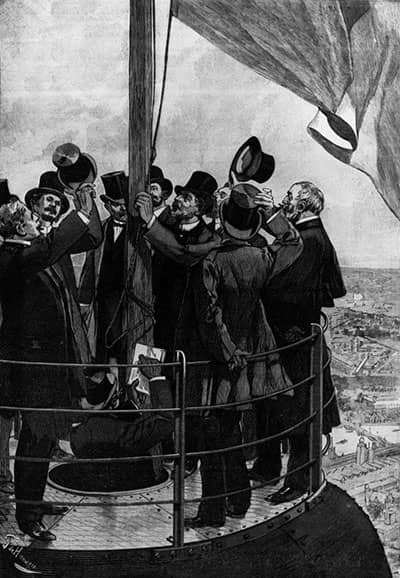 Was it really finished?
On March 31, the Tower’s interiors were not yet finished. The construction team were still busy working on every floor. Just like the major site of the World Exhibition, stretching from Champ de Mars to Trocadéro, everything was being finalized. The Tower would open to the public on May 15, 1889.

What color was it?
In 1889, the Tower was red. The very first color was Venetian red, from the anti-rust paint originally applied to all the puddle iron pieces during pre-assembly in the Eiffel workshop in Levallois-Perret. During the month of March 1889, the Tower was covered with a thick coat of a splendid “red-brown” paint. This would be the first of its 7 official colors.

What about the lifts?
The hydraulic lifts in each pillar that were meant to take visitors from the ground to the 2nd floor were not yet operational! They would only enter into service in June, a good month after the public opening. While waiting, the construction workers, then the first visitors had to use... the stairs, at least to the 2nd floor.

What were the stairs like?
The Tower featured stairs with 360 steps, interspersed with landings, from the ground to the 1st floor. To get to the 2nd floor, visitors had to climb 380 steps in a very narrow, spiral staircase with no landings! Another spiral staircase connected the 2nd floor to the top: this one is not open to the public, as it is too dangerous (a portion of the historic stair is exhibited at the 1st floor of the Tower).

How tall was it?
The monument known as the “300-meter Tower” grew on the day of its inauguration. This was thanks to the large flagpole and tricolor national flag, installed at the top by Gustave Eiffel. It measured 1,024 feet (or 312 meters) when it opened to the public on May 15, 1889, for the World Exhibition. 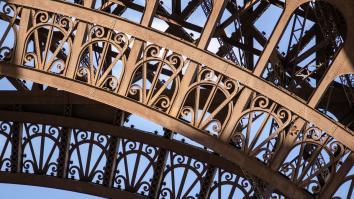 Why do we call it the Iron Lady?
History and culture

The 1889 World Exhibition is at the origin of the Eiffel Tower. Open to the public on May 15, 1889, the Tower, as the Fair’s main attraction, stunned the world with its dimensions and bold construction. By Bertrand Lemoine.
130 years
Tickets for individuals
Tickets for professionals*