Almost from the very opening of the Eiffel Tower for the 1889 Exposition Universelle, visitors could access the floors of the monument by taking the lifts. A veritable technical triumph for the time, as never before had the limits of such heights and loads been broken, the lifts offered hundreds of thousands of visitors the possibility to securely climb the Tower to embrace the whole of Paris.

Perhaps today the lift seems an everyday facility, but at the time it was a real achievement.

Two of the original lifts are still in service on the Eiffel Tower. 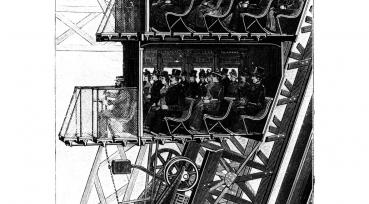 The elevators at the time of construction

Between the ground floor and the second floor: The four pillars were equipped with one or two cabins.

In June 1889, five hydraulic elevators went into operation. This initial elevator technology was further modernized a decade later by Gustave Eiffel for the Universal Exposition of 1900.

Between the the second and third floor: An "Edoux" elevator was put into service, a hydraulic machine that was the only one of its type in the world, with jacks 80 meters long. (It was dismounted in 1983).

North and South pillars : "Otis" elevators carried the visitors up and down until dismounted in 1910.

East and West pillars: "Roux-Combaluzier" elevators were in service until 1897.  "Fives-Lille" hydraulic elevators were installed in 1899, modernized in 1986 and 1987, and revised in 1992, 1995 and 2005. In 2008, the major project of totally replacing the West pillar elevators began, with the intention of coming back to the original and simple functioning machines imagined by Gustave Eiffel in collaboration with the Fives-Lille company in 1899. 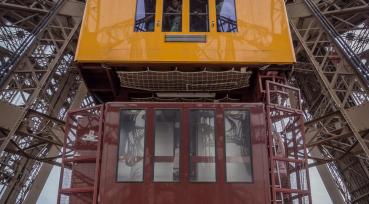 Between the ground floor and the second floor:
3 elevators - North, East and West pillars - are dedicated to visitors.
1 electric elevator is exclusively used by customers of the Jules Verne restaurant.
1 4-ton freight elevator - South pillar - is dedicated to the Eiffel Tower's staff

Between the second and third floor:
2 double-cabin electric elevators

The elevators are vital to the monument and subject to some harsh treatment.

The cabins, the electrical and computer systems, along with the historical machinery behind the elevators receive the greatest care and maintenance: renovation work, repairs, parts replaced and oiled. They are constantly checked by technicians, who start them up early in the morning before the public arrives and keep them under close surveillance whenever the Tower is open to the public. Eiffel Tower elevator operators handle the smooth flux of visitors.

The lift on the north pillar is undergoing total renovation: it will resume service in 2023.

The renovation of the original lifts

Begun in October 2008, the work on the western lift was concluded in 2014. It is a long process for the teams, which vary from 10 to 45 people, representing many building trades.

Since 1899, these lifts have been a mechanism unrivalled by anywhere in the world. They are neither lifts in the traditional sense, nor a funicular system, nor cable-cars. They do not belong to any category and do not correspond to any current reference. This machinery from more than a century ago must therefore be adapted to today’s security criteria. Even if the principal mechanics of the lifts with their lift drive piston and system of pulleys are preserved, everything will change! They will have to replace the cab, the cab platform, the rail mounting of the platform, the hydraulic system, and the electric ropes.

Why this modernization of the original lifts?

Quite apart from a necessary compliance with current regulations, the objective of the modernisation is to improve performance of this historical equipment and to optimise their maintenance conditions.

As the Tower’s modernity must go hand in hand with longevity and durability, the SETE (Société d’Exploitation de la tour Eiffel), or Tower Operating Company, favoured a solution to respect its heritage. It will enable the return to the principle of water hydraulics that the engineers had initially designed in 1899, at the same time reinforcing the introduction of the automatic system. Respecting its policy of durable development, and in order to contribute to limiting the monument’s carbon footprint, the SETE has held to a principle of renovation that presents several advantages:

A more ecological system: the hydraulic system will be fuelled by an eco-friendly fluid, and will significantly reduce the quantities of water consumed during the cooling process.

A less greedy system: with the same consumption of electricity (300 KW), the lift will be capable of transporting up to 110 passengers (instead of 92 at the moment) at a speed of 2 metres/second.

kilometers travelled by the Tower's lifts

Their annual journeys combined are equal to two and half times around the world or more than 103,000 kilometers.

A simple yet brilliant mechanism

The passenger cabin is carried by a cab attached to cables, and is kept level by a recovery system. Underground, a hydraulic system sets 2 pistons in motion, which generate level movements for a cab.

The cab carries the cables that pull the cabin by a system of pulleys smoothly upwards along the 128 metres of its course between the ground and 2nd floor.

Until 1986, the pistons were set in motion by a hydraulic system, powered by three large accumulators of around 200 tonnes each, which ensured both that the water was kept under pressure (40-60 bars), and the smooth operation of the counterweight mechanism.

Since 1986, high-pressure oil hydraulic motors have taken over for driving the movement of the lift drive piston system, while two of the original three large accumulators serve only as a counterweight.

The repainting campaign is an important event in the life of the monument and takes on a truly mythical nature, as with everything linked to the Eiffel Tower. It represents the lasting quality of a work of art known all over the world, the colour of the monument that is symbol...