Using virtual energy generated by the actions of hundreds of millions people worldwide, it will be a powerful artistic statement that we can unite to deal with the climate crisis.

At the heart of the installation is the largest ever virtual energy generator, involving hundreds of millions of people worldwide, everyday. A counter will display the physical calorie count of 75 million daily users of RUNTASTIC. It will also measure the volume of tweets generated live during COP21.

The Eiffel Tower, the world symbol for climatic commitment.

This energy displayed in the counter will be released into the art installation, lighting 24 moving beams at the top of the Tower, transforming it into a living symbol.

HUMAN ENERGY will also project a new Climate Sign onto the skirt of the Tower.

Raising the Climate Sign is a way for people anywhere in the world to signal that our energy is untied for climate action now. 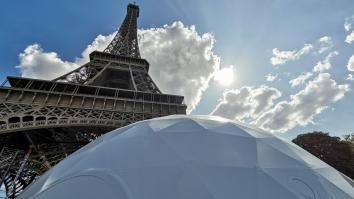 Beginning on September 28, the Eiffel Tower will offer a unique exhibition on its esplanade, retracing the saga of its construction. An exhibition that’s free and open to everyone!
130 years

Free exhibition by artist Akihiro Nishino at the Eiffel Tower!

On October 26 and 27, Japanese artist Akihiro Nishino will be exhibiting his luminous creations at the Gustave Eiffel Lounge on the 1st floor of the Eiffel Tower. Free admission for all our visitors.
Events
Tickets for individuals
Tickets for professionals*