Japonismes 2018: the Eiffel Tower meets the land of the rising sun

On 13 and 14 September, the Eiffel Tower will be the setting for a completely unique light show to celebrate the 160th anniversary of diplomatic relations between Japan and France. And on 14 September, visitors to the Tower can sample the famous Japanese “tea ceremony” on the 1st floor.

The Eiffel Tower adorned in Japanese light! Make sure you’re at Trocadéro or on the right bank of the Seine on 13 and 14 September to catch this amazing spectacle of light and sound. It’s the highlight of Japonism 2018, the cultural season in celebration of Japan. The special light show has been designed by two internationally renowned female designers: Motoko Ishii, a Japanese pioneer in the world of lighting design, and her daughter, Akari-Lisa Ishii, a Parisian designer.

This light show, in which the Eiffel Tower will don the colours of Japan, is a first for the monument!

A 10-minute show running in loop all evening

As part of a one-off event, the ten-minute light show will run on a loop over the evenings of 13 and 14 September, so that everyone in Paris, locals and visitors alike, can come and enjoy the show whenever suits them.

The light show will begin after sunset, and be repeated all night until 1am, when the Eiffel Tower turns off its lights.

Split into two acts of 7 and 3 minutes, the light show is an original production based on symbols of Japan, and has its own soundtrack, composed especially for the occasion, creating a synergy of light and sound. The first act pays tribute to messages of Freedom, Beauty, and Diversity. In the second act, Korin Ogata’s painting, Irises Screen, will be projected in large format for the very first time. It’s the first show of its kind, and can only be seen on 13 and 14 September. Come and discover the beauty of Japan in lights, in interplay with the lines of the Eiffel Tower!

The designs of the light show are courtesy of Motoko Ishii Lighting Design & I.C.O.N.

13 and 14 Septembre from 8.30pm to 1am
Duration : 10 minutes, in loop
Show visible from the Seine river bank, free of access

Tea Ceremony in the Salon Gustave Eiffel on 14 September

The homage to Japan continues on the 14 September, when visitors to the Eiffel Tower can enjoy demonstrations of the traditional Japanese tea ceremony in the Salon Gustave Eiffel (1st floor) from 11am to 5pm. On the menu: traditional Wagashi pastries to try, and artisan crafts on display.

Diplomatic relations between Japan and France began 160 years ago. Ten years later, in 1868, Japan entered the Meiji period, in which it opened up to the West.

The “Japonismes 2018: resonating souls” cultural season is a celebration of these anniversaries, and a packed programme of cultural and artistic events will run from July 2018 to February 2019 in Paris and the Greater Paris area.  Every facet of Japanese culture will be revealed: film, music, painting, drawing, and food. 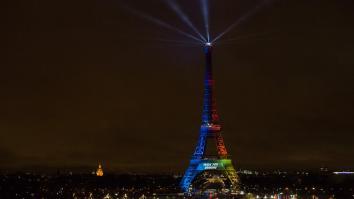 For the submission of the third and final application file of Paris’ bid for the 2024 Olympics Games, the Eiffel Tower was adorned with Olympic colors on Friday, February 3rd. This illumination allowed Paris 2024 Organizing Committee to present the slogan of the Parisian bid: "Ma...
Events

The Eiffel Tower in the Colors of Europe

All about the Eiffel Tower illuminated in the colors of Europe.
Events