A zip line at the Eiffel Tower

It’s undoubtedly one of the craziest events that has taken place on the Eiffel Tower in recent years. And as crazy as it seems, it remains an extremely exceptional event.

Note to thrill-seekers: just like in 2017, a zip line is once again being organized by Perrier and the French tennis Open (Roland-Garros)* from May 29 to June 2, 2019 as part of a promotional campaign. It is only the 3rd time in the life of the Eiffel Tower that a zip line has been set up.

The winners of the "Smash Perrier" contest, which is broadcast on social networks, have the distinct honor of taking off from the 2nd floor of the Eiffel Tower at 377 feet (115 meters)  in the air, then hurtling more than 2,625 feet (800 meters) over the Champ de Mars, suspended in a harness, at speeds of up to 62 mph (100 km/h). Then a stunning arrival at the speed of a tennis ball into the "mouth of a lion" (literally) in front of the Military Academy.

It is an extremely rare and unique experience, on one of the most visited monuments in the world.

Let's hope that the attraction will be back in the next few years!

Did you know?
Before the "Smash Perrier" zip lines of 2017 and 2019, the Tower's only zip line was installed for one man in 2004: the athlete Stéphane Diagana. Ahead of the Athens Olympic Games, the Olympic flame had crossed Paris before reaching Greece. On the occasion of a highly publicized relay, the French runner had flown over the Champ de Mars strapped to a harness from the 2nd floor of the Eiffel Tower!

For thrills seekers, there's nothing like a #zipline to fly over the 800m of the Champ de Mars at a speed of 90km/h !
Let's have a look at Gregoire's descent ? #SmashPerrier @PerrierFR #EiffelTower #TowerTuesday pic.twitter.com/RMtwM2Q9Jb

The most unusual race in the world will take place at the Eiffel Tower on 13 March 2019 for the fifth consecutive year: the Vertical!
Events 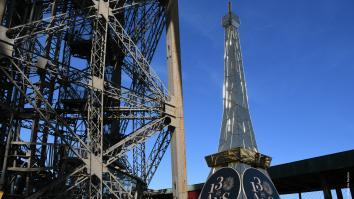 Come take a break on the first floor on our 2019 summer terrace!

Better than Parisian rooftop bars! The Eiffel Tower is offering a large relaxation terrace on the 1st floor, decorated for its 130th birthday. A unique venue and view, guaranteed.
130 years 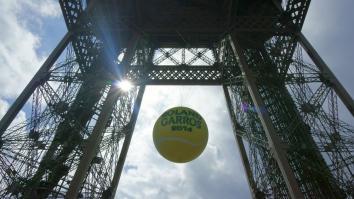 From May 20th to June 10th, the Eiffel Tower pays tribute to the famous international tennis tournament of Roland Garros. A giant tennis ball is hitched between the first and second floor.
Events
Tickets for individuals
Tickets for professionals*