Maurice Koechlin, the engineer without whom the Tower would not exist

Portrait of the author of the preliminary project for the 300 Meter Tower!

French-Swiss engineer Maurice Koechlin was one of Gustave Eiffel's most loyal partners. Born on March 8, 1856 in the Haut-Rhin, he was hired by the Eiffel company in 1879 after graduating from the Polytechnicum in Zurich, where he had studied under Karl Culmann and discovered graphic statics (an entirely geometrical method of solving static mechanics problems), which would later be of great use to him in designing the Tower.

The talented young engineer joined the company to take on the difficult task of managing the design office. Four months before his arrival, Theophile Seyrig, a long-standing collaborator of Gustave Eiffel, had left the management of the design office following major disagreements. His replacement took up the new challenge and immediately set to work on completing all the calculations for the famous Garabit Viaduct, a stunning railway bridge that is still standing in the Cantal department in France. He also took part in designing the structure of the Statue of Liberty with Auguste Bartholdi. 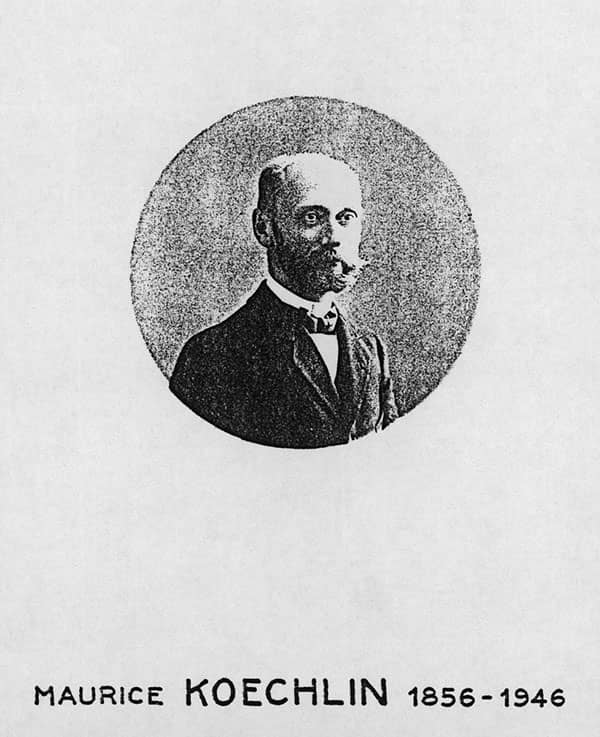 The author of the first sketch of the Tower

Koechlin worked closely with Emile Nouguier, another engineer in charge of technical surveys and assembly who had joined the company three years before him. In 1884, there was talk of building a giant tower. Granite, masonry... ideas abounded but did not last long. In the Eiffel studios in May 1884, the two colleagues, Maurice Koechlin and Emile Nouguier, were discussing the upcoming World Exhibition that would take place in Paris and wondered what could be done “to make it more attractive”. They came up with the idea of a very tall tower, made of metal, the Eiffel specialty. On June 6, 1884, Maurice Koechlin made a rough calculation and an initial sketch of a 300-meter metal tower at his home, which he entitled "300-Meter-Tall Pylon”. 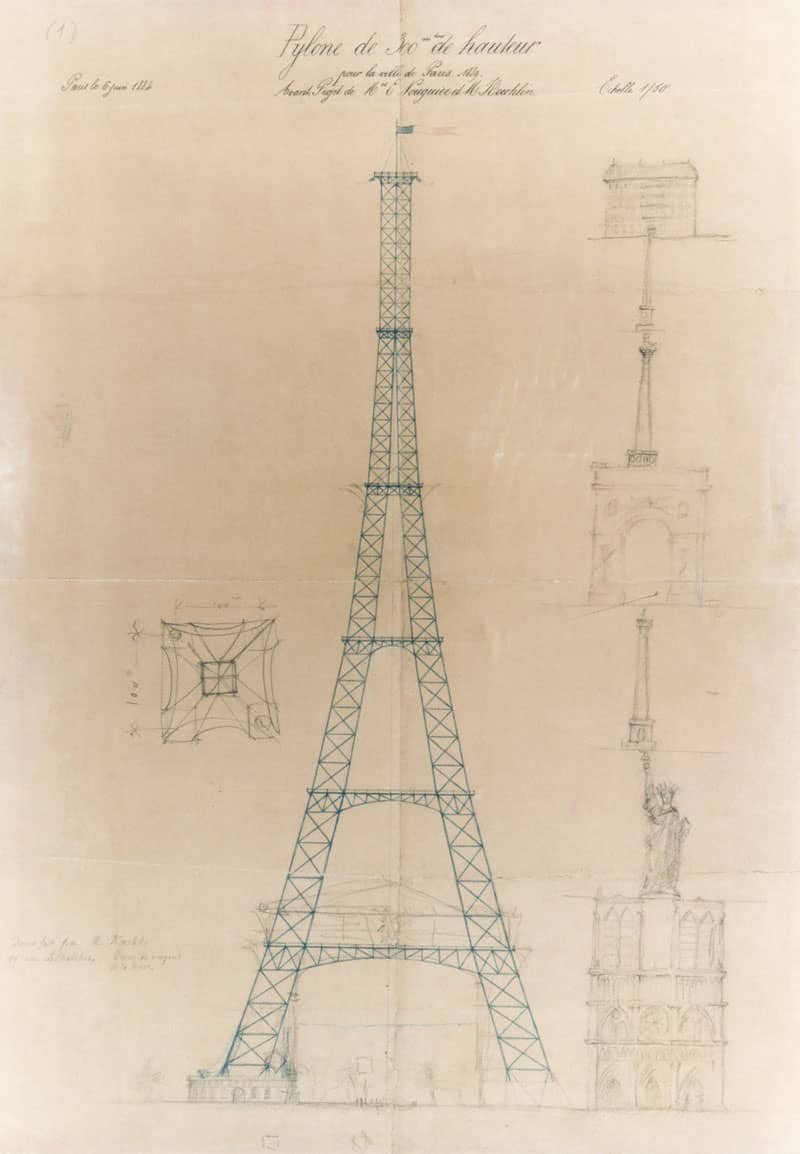 The drawing was directly inspired by the large pillars of the metal viaducts built by Eiffel during this period. Although very basic and not very aesthetic, it already featured the quintessential elements of the ingenious design:  four legs composed of solid columns linked together by lattice girders rising obliquely to meet at the top, curved piers for better wind resistance, etc.
It was time to present the design to the big boss, who was unfortunately not very impressed and disregarded the project. However, he did authorize his employees to continue working on the idea.

Koechlin and Nouguier worked with architect Stephen Sauvestre to make the project more aesthetic and attractive. The reworked and "decorated" project was again submitted to Gustave Eiffel, just before its exhibition at the Éxposition des Arts Décoratifs in September 1884. Eiffel was convinced and registered a patent in the names of Eiffel, Nouguier and Koechlin! 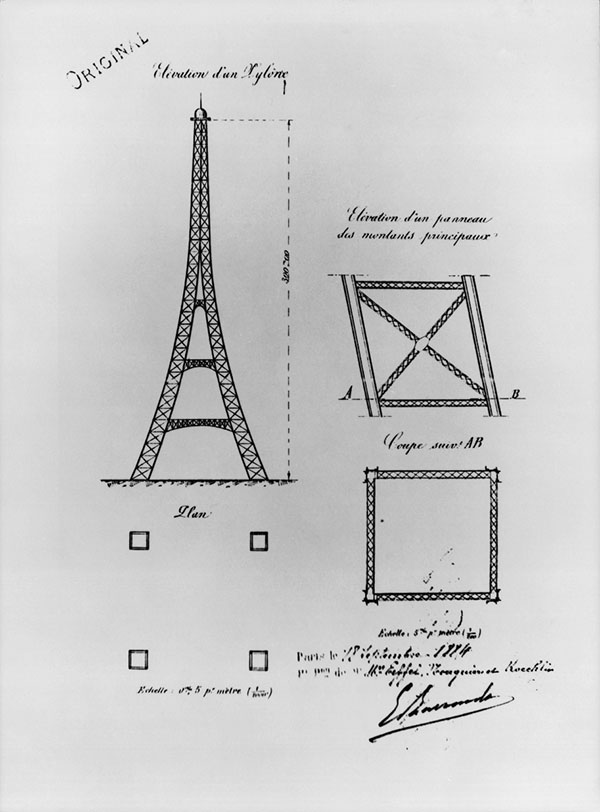 Two years later, in November 1886, the project was officially adopted and the “300-meter Tower” was built and presented as the highlight of the 1889 World Exhibition.

As Gustave Eiffel's loyal right-hand man, Maurice Koechlin oversaw the design (5,300 drawings!) and innumerable calculations for the monument, then closely supervised its foundation and construction between 1887 and 1889.

A life dedicated to the former Eiffel company

In 1893, Gustave Eiffel withdrew from his business and company after the Panama Canal scandal. The Eiffel company was renamed Société de Construction de Levallois-Perret, and Maurice Koechlin became its director. It continued to work on the construction of metal structures for railroads and roads. Even after his retirement, Maurice Koechlin was still involved in the company and the life of the Tower at the end of the 1930s. He remained President of the Board of Directors of the Anciens Établissements Eiffel (the new name of the Levallois Perret company, adopted in 1937) and of the Tower.

Should the monument have been called the Koechlin Tower instead of the Eiffel Tower? The best person to answer this question is Koechlin himself! Interviewed in 1939 in the magazine "La Renaissance", for the 50th anniversary of the Eiffel Tower, he modestly said the following: “Eiffel is the undeniable father of the Tower [...] full of tireless perseverance [...] He remains the great creator and the man of sufficient prestige and audacity who was able to shake up the public authorities and impose his project.”

Eiffel and Koechlin remained friends until Gustave Eiffel's death in 1923.

In homage to the Eiffel Tower’s two creators, the exterior passageway between the south and west pillars on the 1st Floor has been renamed "Rue Maurice Koechlin et Emile Nouguier". 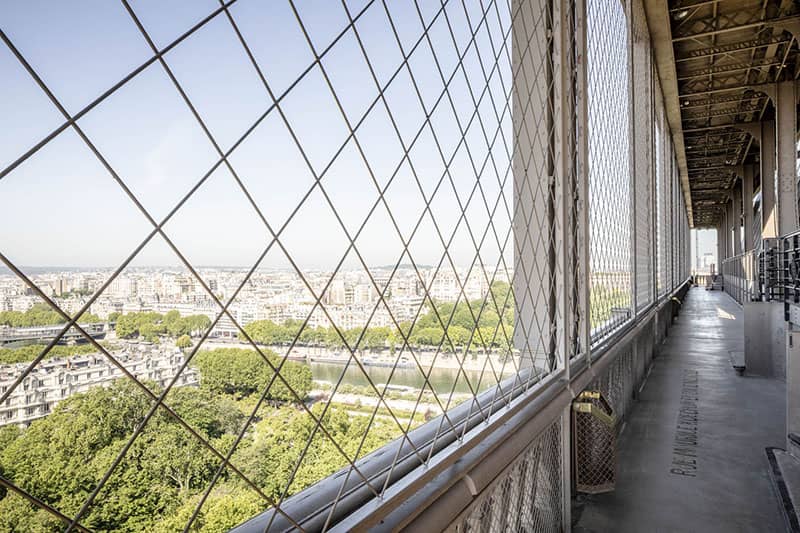 The Eiffel Tower was invented as a challenge—to make the world’s highest tower. But would it have been built without the experience that the Eiffel company acquired in tall metal viaducts? By Bertrand Lemoine
130 years

To celebrate welcoming 300 million visitors since opening to the public in 1889, the Eiffel Tower is putting on an exceptional entertainment programme on Thursday 28th September. The perfect occasion to give thanks to those who have paid the Tower a visit over the years, as well ...
Events
Tickets for individuals
Tickets for professionals*