Next time you approach the Eiffel Tower, activate Snapchat on your phone for a few surprises!

With approximately 249 million active daily users worldwide, Snapchat is one of the most widely used social networks, especially among young people under 20. Every day, an average of 3.5 billion “Snaps” are created by the mobile app’s users.

At the cutting edge with its fun and interactive features, Snapchat also stands out for its advanced exploration of augmented reality (technology that allows you to add 3D graphics or animations to real images) using filters or mini-games. And that’s where the Eiffel Tower comes in. Did you know that the Eiffel Tower is one of the few world monuments to be a Snapchat Landmarker*?

Landmarker, instructions for use

Landmarker technology lets Snapchat digital design enthusiasts create augmented reality filters (lenses) that are perfectly adapted to a famous monument, so it can be transformed. The monument can be brought to life or its appearance can be dramatically altered, giving on-site visitors an exceptional opportunity to view “Snaps” and share them with their friends on Snapchat.

The Eiffel Tower was one of the first five sites modeled as a Landmarker in 2019, but there are now about twenty including Buckingham Palace in London, the U.S. Capitol in Washington D.C., the Arc de Triomphe in Paris, the Tower of Pisa in Italy and the Statue of Liberty in New York.

Anyone can create these filters using the Lens Studio platform. Professional or amateur designers can let their creativity run wild. It’s also a playground for brands as well as TV, cinema, and video game franchises who can promote their products by staging them in front of famous monuments and offering users an immersive and fun experience. This is how HBO made dragons land on the Flatiron Building in New York for the release of a new season of “Game of Thrones”.

In June 2019, snapchatters could see Spiderman and Mysterio flying around the Iron Lady to announce a film release. A month before, a soft drink brand bedecked the Tower in lush tropical vegetation! These operations are limited in time.

How does it work?

Nothing could be easier than trying it out. When you’re near the Tower or another Snapchat Landmarker,

Now it’s your turn to play! 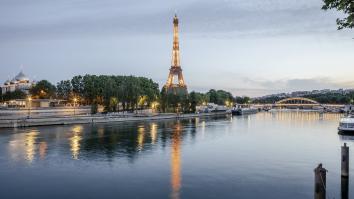 Since she was built, a multitude of rumors and legends have circulated about the Iron Lady. Here, we’ve collected and debunked the craziest of the myths about the Eiffel Tower.
History and culture

How to draw the Eiffel Tower ?

Recreate the Eiffel Tower using our selection of the best drawing tutorials and coloring suggestions for young and, not so young!
Recreation
Tickets for individuals
Tickets for professionals*