Since she was built, a multitude of rumors and legends have circulated about the Iron Lady. Here, we’ve collected and debunked the craziest of the myths about the Eiffel Tower.

From an expansion project to illegal photos and the Tower being sold, some of these urban legends were invented from scratch while others have a grain of truth, but here you’ll get the full story!

The Tower sits on hydraulic jacks, or directly in the Seine river

How can a 1083 feet high tower weighing over 10,000 tons stand upright?
Many of the legends seek to answer this question. The first answer would have us believe that the Tower sits on hydraulic jacks that allow it to bend in strong winds and rain. These jacks did exist, but they were a temporary arrangement while the pillars and first floor were being built.

Furthermore, the Tower does not have its feet in the water, as other people often claim.  In fact, it rests on masonry foundations that are anchored in dry ground, and have no contact with the Seine.

The Tower was almost sent to Montreal in 1967

Montreal’s Mayor, Jean Drapeau, did in fact want to bring the Eiffel Tower to Montreal for the duration of the World’s Fair in that city in 1967. An official request was sent to France and the city of Paris, but that’s as far as it went.

Some have suggested that Gustave Eiffel was in love with a woman whose name began with the letter "A" and that he gave the tower its shape in her honor, or that the designing engineer wanted to depict an upside-down garter belt. Romantic as they may be, these interpretations are not true.

The only things they considered when giving the Eiffel Tower it’s shape had to do with ensuring minimal wind resistance, for the best possible stability. More detailed explanation about the Eiffel tower shape.

In 2008, the media reported massively on an architectural project to extend the top of the Eiffel Tower in the form of a huge flower. It so happens that this project, called "Eiffel DNA" and imagined by Serero Architects, was neither solicited nor envisaged by the Société d'Exploitation de la Tour Eiffel and existed only in their imaginations.

No, it’s perfectly legal to take photos of the Eiffel Tower at night and keep a lasting memory of that unique moment when you saw the beacon scan the skies over Paris and the lights illuminating the structure, or to immortalize the five exquisite minutes of sparkling lights. Be it night or day, it’s fine to take and share your personal photos of the Eiffel Tower anytime and anywhere!

The only restriction is on professional use, because the Tower’s lighting and sparkles are protected by copyright. Anyone wanting to use an image of the Eiffel Tower at night for professional purposes must get authorization and may be required to pay a fee. We invite professionals to contact the Société d'Exploitation de la Tour Eiffel (SETE), for information about authorization to use their images.

You can see Mont Blanc from the Eiffel Tower, or to see the Tower from London

It is, of course, impossible to see Mont Blanc even from the top of the Eiffel Tower. The 3rd floor of the Tower rises to 905 feet, and from there, the distance to the horizon has been calculated at just under 37 miles. Although air pollution often prevents you from seeing that far, it’s still a spectacular view from that height!

On a clear day, you can enjoy an incomparable view of the Butte de Montmartre, the Bois de Boulogne, Mont Valérien, and many other points beyond the Paris ring road.

Another recent urban legend suggests that it’s possible to see the Eiffel Tower from the London Eye observation wheel in England, thanks to reduced air pollution that makes the view clearer. This belief is also false. What some people saw was not the Eiffel Tower at all, but a huge remote-transmission antenna that has a similar shape, but is located in the suburbs around London.

Gustave Eiffel had a secret apartment at the summit

In his time, Gustave Eiffel set up a personal apartment at the Tower’s summit, which he used as an experimental laboratory and an office to receive illustrious guests.
Since it was inaccessible to the public, there was much conjecture about it, and it became a “secret apartment” in many imaginings and rumors.
Today, only part of the apartment has been preserved while the rest of the space is used as technical facilities. Visitors can peek through a window to see a reconstruction of the office with wax statues of Gustave and his daughter Claire receiving Thomas Edison.

A mosque on the 1st floor

There’s a rumor circulating since 2011 that there are plans to build a mosque on the Tower’s 1st floor. No such project has ever been suggested.

The Statue of Liberty, inaugurated in New York in 1886, was donated by French philanthropists to the United States to commemorate the 100th anniversary of the American Declaration of Independence. It was designed by sculptor Auguste Bartholdi, and its internal structure was developed and built by Gustave Eiffel in his Levallois Perret workshops a few years before he began building his 300-meter tower.

The man who sold the Eiffel Tower

In the 1920s, Victor Lustig actually sold the Eiffel Tower to André Poisson, an insecure businessman who wanted to make a name for himself. The transaction was of course a carefully planned scam, and was a success for the con man who fled as soon as the deal was closed.

A month later, Lustig tried the subterfuge again, but this time his plan was thwarted by a less gullible buyer. If you’d like to know more about who really owns the Eiffel Tower, click here. And no, it's not for sale! 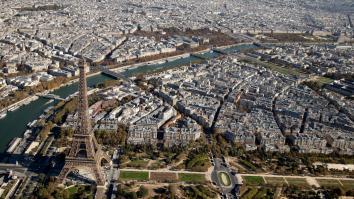