Who sold the Eiffel Tower?

From the first years of its existence, the Eiffel Tower inspired outlandish greed, with one con man going so far as to actually sell it!

Victor Lustig organized numerous swindles both in France and the United States. He indulged in some of the most ambitious of scams. One of them directly targeted the Tower! Learn more about the build up to this incredible and yet true story that’s worthy of a movie script.

In the mid-1920s, the Eiffel Tower had just lost its main protector and promoter: Gustave Eiffel, who died in 1923.  Lustig read in the press about the monument’s declining financial viability due to expensive maintenance and declining attendance, and developed an almost "plausible" scenario in which the Tower's owner, the City of Paris, was planning to close and dismantle the Tower and sell it for scrap metal.

Of course, this was far from true! Gustave Eiffel had been guaranteed of the Tower’s continued sustainability in the 1910s, not only because of its iconic status since the 1889 World's Fair, but also based on its strategic position as radio transmitter and receiver.

A rather unique auction

His plan was flawlessly crafted, he pretended to be a high-ranking Parisian civil servant, even going so far as to write bogus official letters to scrap metal companies arranging meetings.

Scrap dealer André Poisson took the bait and showed up for an auction with other potential buyers, who were in fact Lustig's accomplices. He thought he had purchased the 7,300 tons of iron from the Tower for an unknown sum! And he didn't realize that he’d been duped until it was too late, and he had already paid for it. The buyer was so embarrassed that he didn’t press charges against the con artist, who had fled to Austria.

Some time later, Lustig tried to sell the Tower again, but this time with less luck. He was again forced to leave France. Exiled to the United States, he continued his rackets, cheating dozens of victims before being arrested and imprisoned in 1935. He died in 1947 at the infamous federal prison, Alcatraz .

Keep reading to learn who has really owned the Tower since its inception. 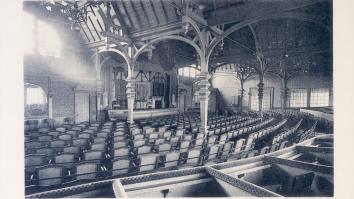 The most incredible installations at the Eiffel Tower

Since its construction, the Eiffel Tower has housed various installations - now gone - that you would never expect!
History and culture

Given its height and media presence, the Eiffel Tower has spurred a number of athletic exploits, performances, and challenges, sometimes with tragic results. By Bertrand Lemoine.
History and culture 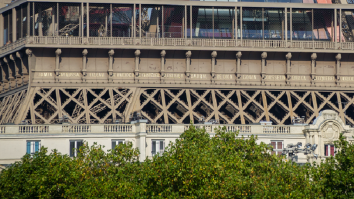 Whose are the 72 names inscribed on the Eiffel Tower and why are they th...

Gustave Eiffel had the names of 72 scholars inscribed on the border encircling the first floor of the Tower. But how did he choose them and why put them there? By Bertrand Lemoine.
130 years
Tickets for individuals
Tickets for professionals*