Every evening, the Eiffel Tower is adorned with its golden covering and sparkles for 5 minutes every hour on the hour, while its beacon shines over Paris.

Unveiled on the 31st December 1985, invented by Pierre Bideau, an electrician and lighting engineer, it consists of 336 projectors equipped with high-pressure, yellow-orange sodium lamps.

This form of illumination, which has been met with unanimous, worldwide success, was the starting point of a nocturnal revival of monuments, in Paris as well as in the cities of France and the world.

The beams of light, directed from the bottom towards the top, illuminate the Eiffel Tower from the inside of its structure. Since 1958, by replacing the 1,290 working projectors that illuminated the Tower from the outside, they have been highlighting the fine metallic structure of the monument and illuminating the areas used by late-night visitors until the closing of the Tower to the public. In addition to the aesthetic aspect, it is equally necessary for the security of the late-night operation of the Tower. 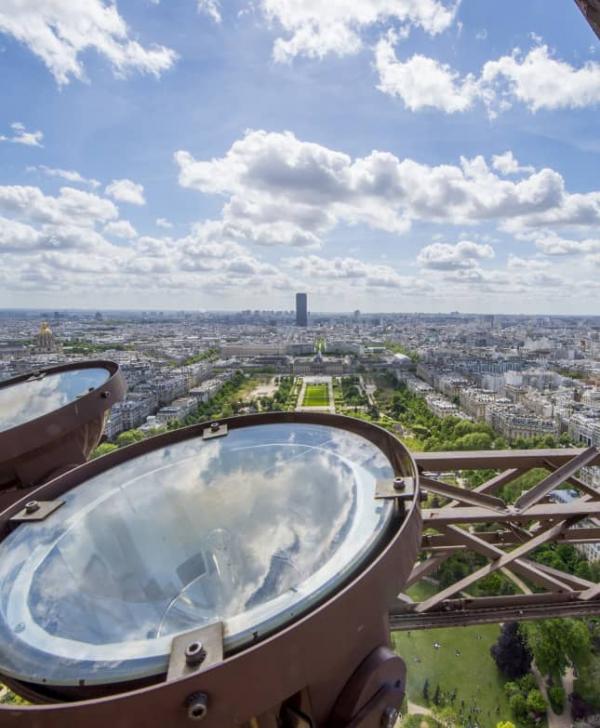 The projectors are turned on in under 10 minutes. This is activated upon nightfall by the sensors.

In 2004, they were replaced by projectors with an electrical power of 600 watts as opposed to the previous 1KW, i.e. an energy consumption saving of around 40%. Their improved output of light preserves all the beauty of the overall appearance.

Since that time and every four years, a team of SETE technicians has replaced the 336 projector bulbs that wrap the Eiffel Tower in golden light every evening. The last operation took place in spring 2019.

Contrary to popular beliefs, the Tower’s nightly illumination, it’s golden glow, only represents about 4% of the monument’s annual energy expenses.

In December 2019, the four 2000W projectors that had illuminated the antenna since 1985 were replaced by LED versions that are 10 times less powerful and consume 10 times less energy.

In 2020, the 28 projectors that illuminate the steps in the outstretched portions of the four pillars will be replaced to reduce the installed power by 80%. 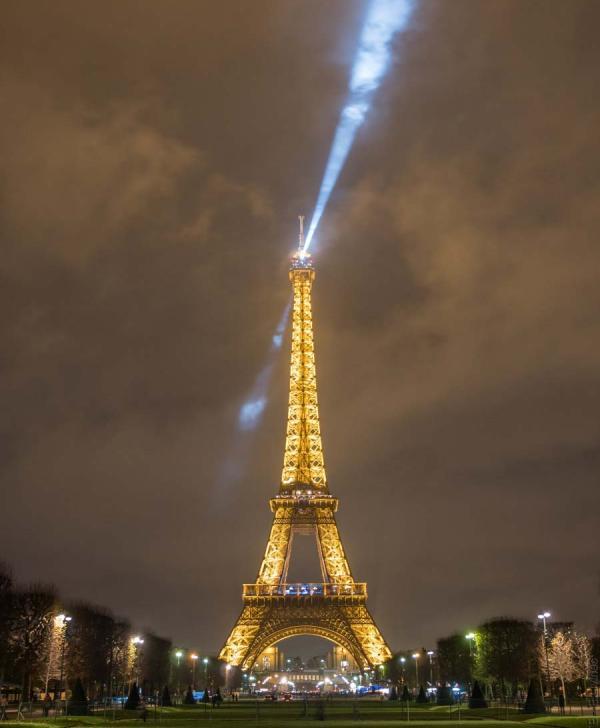 The Beacon and Sparkles for the "Countdown to the Year 2000"

On 31 December 1999 at the approach of midnight, the entire world will discover the beacon and the Tower's sparking lights.

The beacon, sending out two light beams with a reach of 80 kilometres, is composed of 4 "marine" motorised projectors. They are operated by automatically piloted computer programs. Since their rotation sweep is 90°, they are synchronized to form a double beam in a cross that pivots around 360°.

The xenon 6000 watt lamps were chosen for their longevity, around 1,200 hours. The lamps are cooled to prevent overheating and a heating system is activated when the temperatures drop below zero Centigrade whilst the lights are off.

This beacon resonates the image of Gustave Eiffel's Tower itself as a universal and symbolic landmark.

The sparkling lights are superimposed over the golden lighting, they bring the monument to life for 5 minutes every hour on the hour once the Tower has been lit up.

As part of the City of Paris emergency energy saving plan launched in September 2022, the Eiffel Tower lights will now be switched off completely from 11.45pm. The lights no longer sparkle at midnight and 1am.

The number
An exceptional installation

Installing the lights is about as impressive as the lighting itself :

Originally a temporary installation to ring in the new millennium, the Eiffel Tower’s lighting unit became a permanent fixture in 2003.

To obtain it’s sparkle effect, each side of the Tower was fitted with 5,000 metal casings containing a 6W xenon bulb, for a grand total of 20,000 lamps and 120kW of electricity.
A team of SETE technicians and rope-access specialists change an average of 300 to 400 lamps per year on the installation.

The 20,000 light bulbs each have a low power of 6 watts and light up randomly, as each bulb is separate from the others. Furthermore, the transition of the duration of the sparkling from 10 to 5 minutes an hour in 2008 has made it possible to reduce the energy consumption and above all to extend the life of the installation by several years.

All these modernizations to the Tower’s lighting unit help to improve its energy performance, and it’s consumption has dropped by an average of 9% per year since 2016.

Sparkling Moments in the History of the Eiffel Tower

Throughout the course of its existence, the Eiffel Tower has been host to lighting effects of a festive nature. Through continual renewal of its sources of artificial illumination, the Tower has benefited from the latest innovations in lighting equipment from the very beginning – from gas to electricity, incandescent lamps to neon, passing from sodium to high-pressure, and most recently LEDs.

Because the Tower’s usual equipment was not designed for special illuminations (colors, flags, messages), these generally require external lighting to be brought in for each occasion. 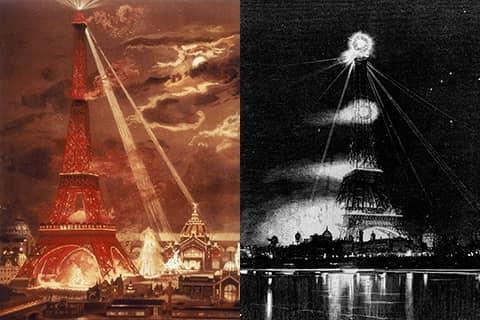 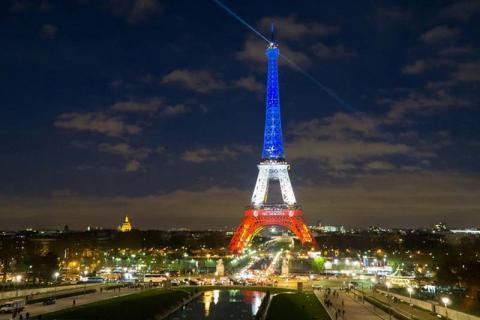 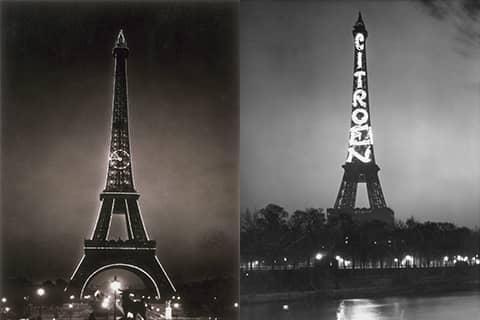 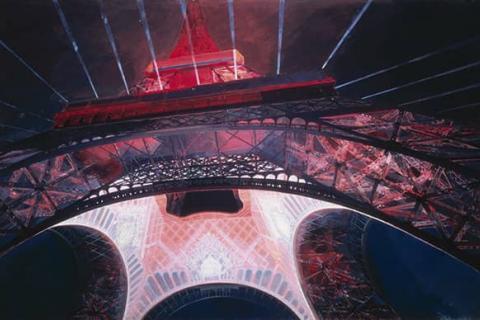 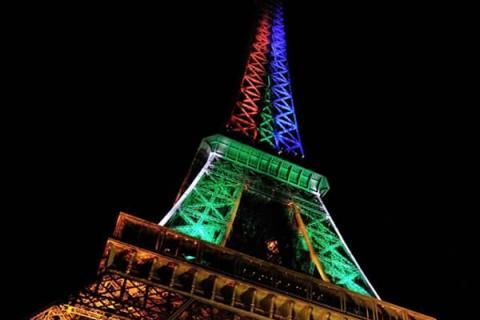 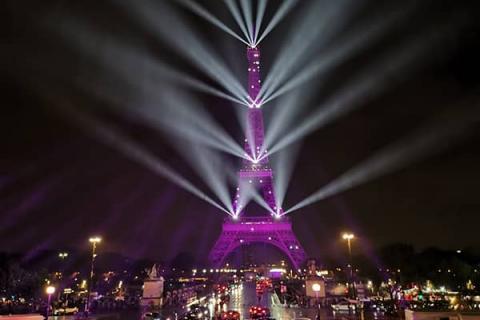 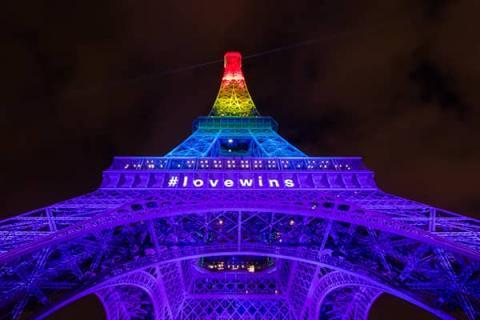 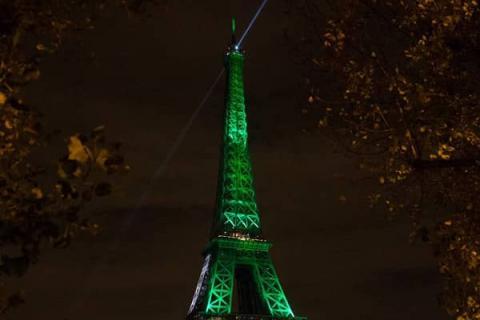 The Eiffel Tower in the world

« A vision, an object, a symbol, the Tower is anything that Man wants it to be, and this is infinite. A sight that is looked at and which looks back, a structure that is useless and yet irreplaceable, a familiar world and a heroic symbol, the witness to a century passing by an...