The Eiffel Tower in the world

« A vision, an object, a symbol, the Tower is anything that Man wants it to be, and this is infinite. A sight that is looked at and which looks back, a structure that is useless and yet irreplaceable, a familiar world and a heroic symbol, the witness to a century passing by and a monument that is always new, an inimitable and yet incessantly imitated object... » (Translation of Roland Barthes, La tour Eiffel, Ed. Delpirre 1964).

It was the tallest tower in the world at the time of its construction and has been imitated in various places around the world. Overtaken in height by today’s great towers, it nevertheless remains unique.

Since the Eiffel Tower was built, people around the world have wanted it for their own. Many monuments have imitated this symbol of Paris and France. Some are inspired by Gustave Eiffel’s work while others are either very similar or replicas.

In 1889, the year of the Tower’s inauguration, the Washington Monument with its height of 169 metres had held the world record for four years. The world would have to wait more than forty years before seeing the Tower dethroned by the Chrysler Building in New York (319 m), which was overtaken in 1949 by the Empire State Building (381 m). Today, towers reaching staggering heights are plentiful, such as the one in Taipei (508 metres) and more recently the Burj Khalifa (828 metres).

The number
Las Vegas, the tallest replica of the Eiffel Tower

The most famous and tallest replica is found in Las Vegas, Nevada. Reaching a height of 541 feet (165 meters), it was built near a luxury hotel-casino complex in 1999. The Eiffel Tower Restaurant and its panoramic terrace offer a superb view of the Bellagio Hotel’s famous fountains.

The Blackpool Tower was built in 1894 and is 518 feet (158 meters) high. Situated along the seafront, its base is obscured by a circus and an aquarium that only reveal its upper structure. Its astonishing architecture gives the impression that the Tower is simply emerging from of the ground!
Tokyo, Japan, is home to one of the most famous Eiffel Tower-inspired constructions in the world. Tokyo Tower was erected in 1958 and rises to 1,093 feet (333 meters), 30 feet (9 meters) taller than its Parisian model! Red and white by day and golden by night, it offers a magnificent view of the Japanese capital.

Two Eiffel Tower replicas were built in China. One in a theme park in Shenzhen in the South-East of the country, and the other in Tianducheng next to Hangzhou. The latter is a 1:3 scale copy of the original and weighs more than 1,000 tonnes. We find other copies in Europe, such as the one in Prague (60 metres tall) at the top of the Petrin Hill. In Slobozia, Romania, there is a copy of around fifty metres in height, just like the one in Parizh, in the South of the Ural Mountains, in Russia. In Lyon (Fourvière), the top part of the Tower has also been reproduced.

How could there be a Paris without its Eiffel Tower? Two replicas in the American cities of Paris, Texas, and Paris, Tennessee, were created in 1995 and 1993. The city in Tennessee erected its simplified Eiffel Tower, which is 60 feet (18.3 meters) high, as a tribute to the French capital. The Texas city added an original touch of local culture to its Tower, crowning it with a red cowboy hat. This 66-foot (20 meter) high tower shines in all colors at nightfall. 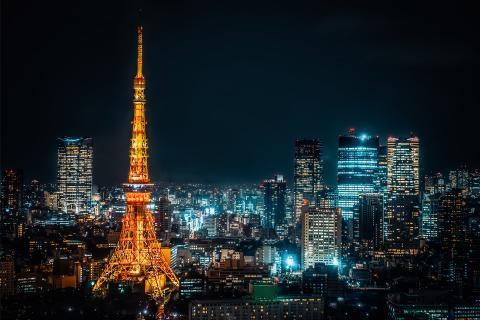 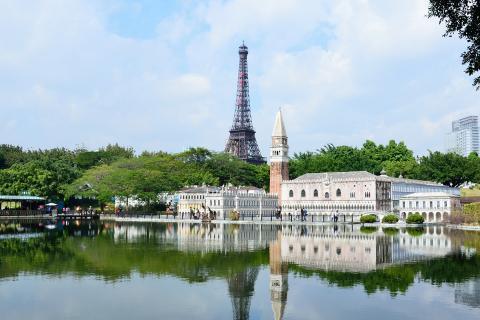 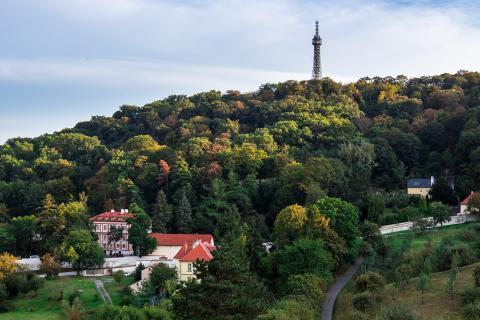 Not far from the original Eiffel Tower, Elancourt is home to France Miniature, a theme park featuring replicas of French monuments including the inescapable Eiffel Tower. Its 33-foot (10-meter) high scale model has nearly identical architecture and is repainted every seven years to match the colors of the original Tower.

A little further away from the Tower, the Mini-Europe theme park in Brussels features many replicas of Europe’s most beautiful monuments. Here, the Eiffel Tower is located just a stone's throw from the Arc de Triomphe, the Sacré Coeur Basilica, and Pompidou Center. Although it’s reduced to a height of 43 feet (13 meters), its details are no less amazing!

Other, similar theme parks have their own Eiffel Towers including Park Miniatur in Andrychow, Poland, or Parque Europa in Torrejon de Ardoz, Spain.

At Walt Disney World Resort in Orlando, Epcot park’s French pavilion boasts a 75-foot (23-meter) replica of the Eiffel Tower that’s remarkable for the fact that it intentionally doesn’t have a first floor, to create the illusion that it’s proportional to its environment. The effect is astonishing! 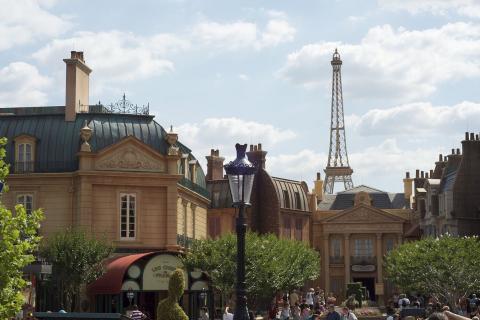 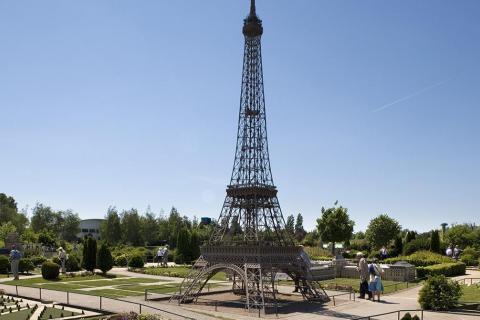 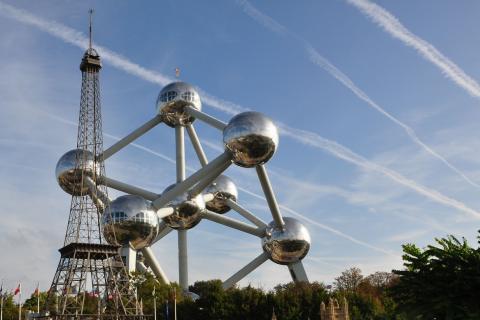 Founded in Paris in 1989 for the Eiffel Tower’s centenary, this federation groups together towers all around the world, all of them symbols of their town or country, which display the common characteristic of both viewing platforms accessible to the public and television broadcasting antennas. The Eiffel Tower is the eldest. The tallest tower is Burj Khalifa (828 metres) and the shortest is the Bratislava UFO (95 metres).

With 50 members in over 20 countries across the world, the World Federation of Great Towers exists to showcase the great towers of the world and celebrate the astonishing feats of architecture and engineering that created them. 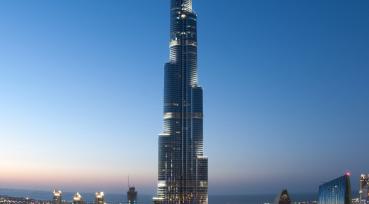 Described as both a ‘Vertical City’ and ‘A Living Wonder,’ Burj Khalifa is the world’s tallest building.

Rising gracefully from the desert, it is an extraordinary union of art, engineering and craftsmanship. At 828 meters, the 200 story tower holds seven Guinness World records including the world’s highest observatory, At the Top, Burj Khalifa SKY. 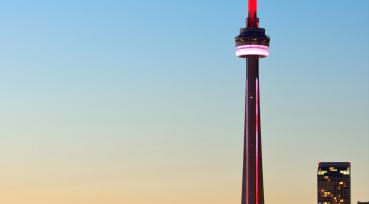 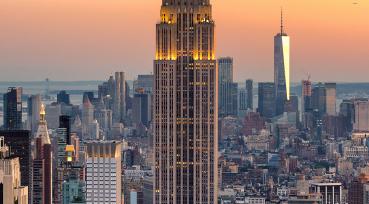 From its open-air 86th floor Observation Deck and climate controlled 102nd floor to its stunning Art Deco design and informative exhibits, the Empire State Building is more than just a view — it’s an immersive experience inside a world-famous landmark. 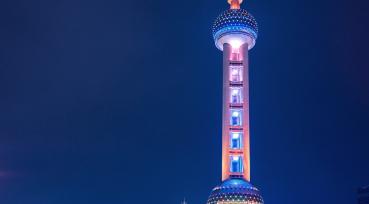 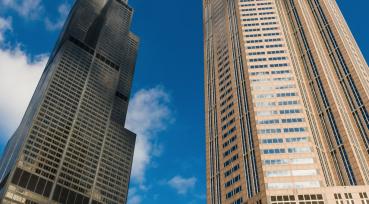 No trip to Chicago is complete without a visit to Skydeck Chicago!

Enjoy 360⁰ views spanning up to 50 miles and 4 states and their most spectacular view—1,353 feet straight down! “Dare to Stand Out” on The Ledge—glass balconies extending 4.3 feet outside the Willis Tower provide a thrilling, once-in-a-lifetime experience! 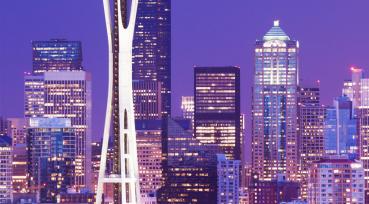 Since opening for the 1962 World’s Fair, the Space Needle has welcomed visitors from every corner of the world to enjoy breathtaking views and savor all things Seattle.

The iconic signature of the city’s skyline, the Space Needle makes the perfect launching pad for Pacific Northwest adventure, exploring Seattle’s vibrant culture, or soaking in the area’s natural beauty. If you see one thing in Seattle, see everything! 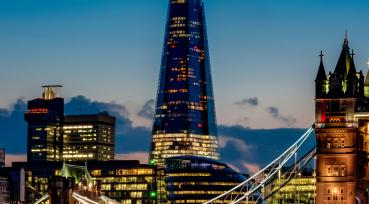 The View from The Shard, London, UK

At the top of the European Union’s tallest building The View from The Shard is the highest viewing platform in London, offering stunning panoramic views stretching up to 64km.

Travelling skyward in high-speed lifts, this multi-sensory journey takes you 244m (800ft) above London, where 1000 years of history unfolds beneath you.

The View from The Shard