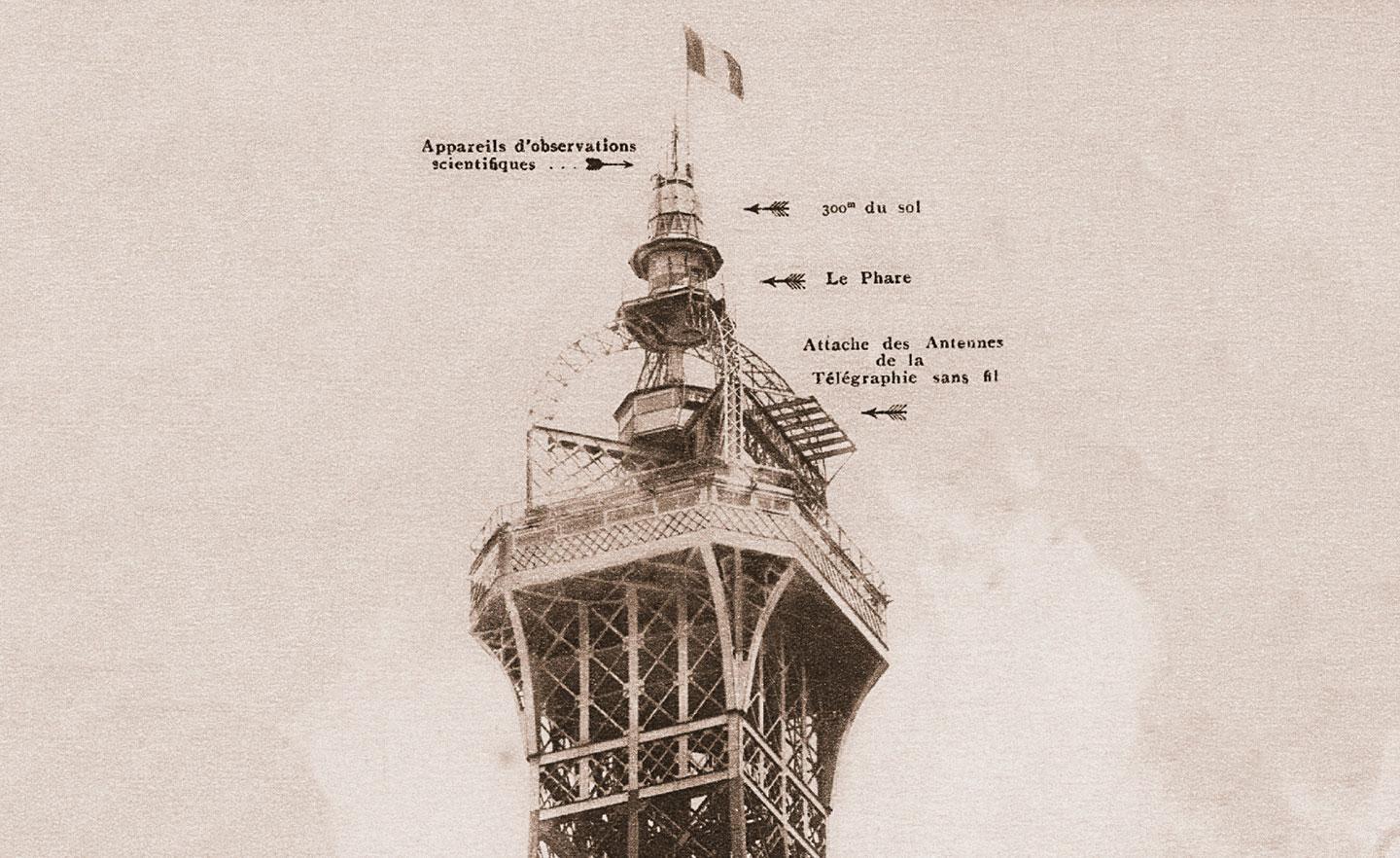 From the presentation of his project in 1886, Gustave Eiffel knew then that only the Tower’s scientific uses could protect it from its adversaries and prolong its lifespan.

Initially, it was supposed to be destroyed after 20 years ! He therefore specified the Tower’s purpose: meteorological and astronomical observations, physics experiments, a strategic vantage point, an optical telegraph communications point, a beacon for electric lighting and wind studies. Gustave Eiffel stated, “It will be for everyone an observatory and a laboratory the likes of which has never before been available to science. It is the reason why, from day one, all of our scientists have encouraged me with their utmost sympathies.

Indeed, from 1889, the Eiffel Tower was used as a laboratory of measurements and scientific experiments. Considerable scientific apparatus was installed (barometers, anemometers, lightning conductors etc.). Moreover, Gustave Eiffel set himself an office aside on the third floor to make astronomical and physiological observations. 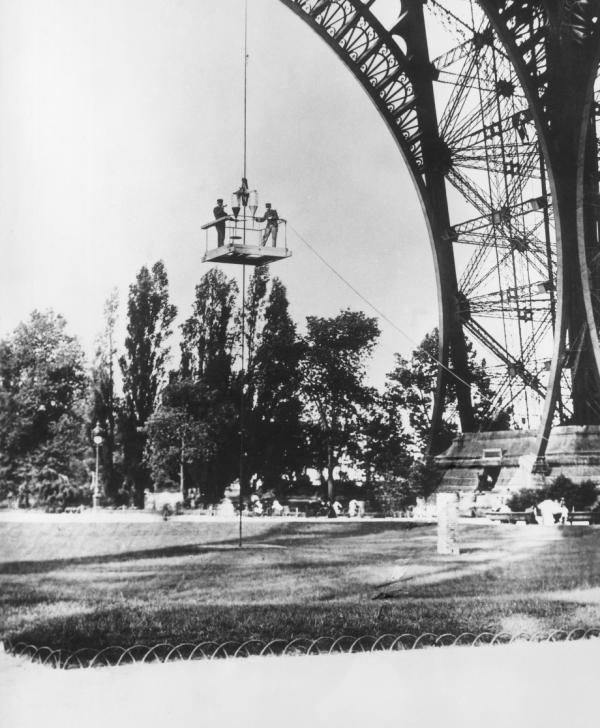 On the day after the Tower’s very inauguration, Gustave Eiffel installed a meteorology laboratory on the 3rd floor. He also had a passion for aerodynamics and carried out a series of observations on gravity (leading to the installation from 1903 to 1905 of gravity instruments). He imagined “an automatic system that would slide along the length of a cable stretched between the Tower’s 2nd floor and the ground.” He had a wind tunnel built at the foot of the Tower, and from the month of August 1909 to December 1911, he carried out five thousand trials. Additionally, Gustave Eiffel encouraged numerous scientific experiments on the Tower: Foucault’s Pendulum, the mercury pressure gauge, physiological studies and radio contact (1898). In the end, it was to be the Tower's role as an enormous antenna that would save it from destruction.

These 72 scientists were engraved by Gustave Eiffel in homage to the men of science. Having disappeared during a painting campaign at the beginning of the century, they were restored in 1986 and 1987.

The Eiffel Tower and the History of Broadcasting

Gustave Eiffel knew that the scientific uses of the Tower could prolong its lifespan. The Eiffel Tower was actually supposed to be dismantled after 20 years! That is why he allowed numerous scientific experiments to be carried out – meteorological and astronomical observations, physics, air resistance, etc.

He succeeded in saving his Tower by putting it forward as a monumental support antenna for wireless broadcasting.

On the 5th November 1898, Eugène Ducretet carried out the first wireless telegraphy trials between the Eiffel Tower and the Pantheon (a distance of 4 km). The transmitter was installed at the top of the Tower. In 1899, the waves crossed the Channel for the first time. 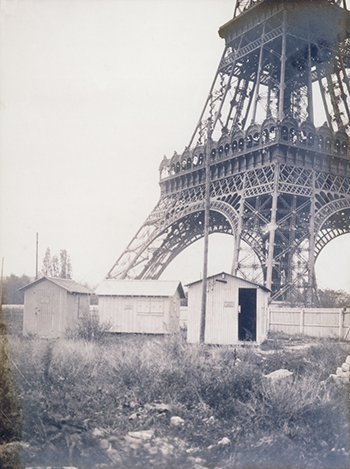 In 1903, Gustave Eiffel, fascinated by scientific experiments, was still searching for a way to save “his” Tower, whose concession from the City of Paris was to come to an end 6 years later. He suggested to Captain Gustave Ferrié, then responsible for studying the military applications of wireless transmission, that he use the Tower for his experiments. He financed this operation, which enabled transmission and reception over 400 km. The Department of Military Engineering authorised Captain Ferrié to install antennas on the Tower. He set himself up in a wooden shelter next to the Southern Pillar.

In 1909, the underground military radiotelegraphy station was set up. The strategic interest in the Tower had been demonstrated and the City of Paris renewed Gustave Eiffel’s concession on the 1st January 1910.

In 1913, the Tower sent telegrams using electrical waves to as far as America and to ships making the crossing in a radius of 6,000 km.

In 1914, during the Battle of the Marne, the Tower’s radiotelegraphic station learnt that General Von Marwitz, Commander of the right wing of the German Army, was having administrative problems and as a result was halting his advance.

Thanks to the Eiffel Tower’s station, important enemy radio telegrams, sometimes concealed by a commercial appearance in neutral countries’ programmes, were deciphered. Spies were exposed, among them Mata Hari.

From 1921, at first as an experiment, a civilian transmitter broadcast music programmes, columns, and lastly the "Journal Parlé" (spoken news) from 1925, picked up by amateurs on simple crystal radio sets. Radio Tour-Eiffel was well-known to Parisians at the time.

Experimental programmes were organised and performers were invited to them, such as Sacha Guitry and Yvonne Printemps.

The Beginnings of Television

In 1935, a television studio was set up in rue de Grenelle and the Eiffel Tower transmitter began to operate. From 60 lines at the beginning of the installation, they then passed to a high definition of 180 lines.

On the 2nd June 1953, thanks to the Eiffel Tower’s transmitter, television showed the whole of France the celebrations for the Queen of England’s coronation live. This was the beginning of Eurovision.

The Tower Has Grown with Television’s Progress

In 1957, live satellite dishes were installed, providing the three television channels’ programmes using 819 lines, along with the frequency modulation radio transmitter. The new antenna made the Eiffel Tower reach a height of 320.75 metres.

In 2000, a new UHF (Ultra High Frequency) antenna led to another modification in the Tower’s height, which was now 324 m.

In 2010, considerable work on the TDF equipment has been done to prepare for the complete changeover to digital television in Ile-de-France.

Art and the Eiffel Tower

From the beginning the Tower was an attraction, but in the 1920s it became a symbol of modernity and the avant-garde. Little by little, its image was associated with Paris, until it even became its worldwide symbol.