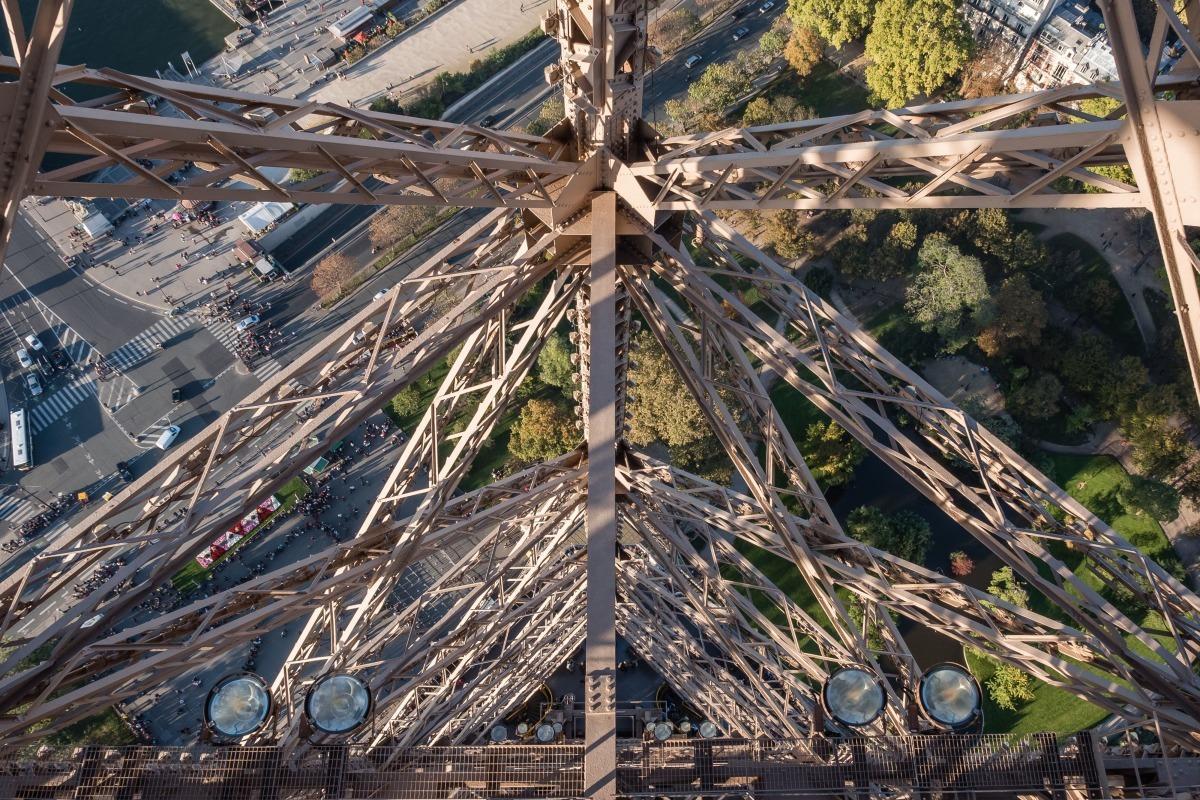 Bar Sectional iron or steel piece in the form of an L, factory made.

Framing member, which stiffens another malleable element (square or rectangular for example).

The two main beams used for cross bracing: in the form of a cross and attached over the 4 angle trusses at the tower top for cohesion purposes. They are 4.5 meters high.

A support (stanchion, truss, beam, etc.) that warps due to weight.

The upper or lower part of a girder or bar. For example, for the 4.9 or 7-meter girders, the chords are U-shaped drawing strength from the flanges to which the lattice or lacing members are attached, thus constituting the main part of the beam.

A clip attaching system tightened with one or more bolts. The clipping technique is used on the Tower instead of soldering for fixing steel pieces onto the original iron pieces that drilling would structurally weaken. Indeed, modern welding on the original Tower iron is technically impossible because it renders the iron fragile as well as it distorts the purity of the skeleton framework.

Steel piece solidifying the floor to the primary structure and thereby transferring the stress to the sub-floor.

All the lightweight box beams visible on all sides of the facade, which join with the trusses to form the primary structure of the Tower, bonding and reinforcing it.

An iron or steel flat bar, long and rectangular, and factory made.

A floor actually represents a group of levels not the number attributed to the order of floors. In fact, the 1st and 2nd floors contain many levels. For example, the second floor is composed of 6 main floors without counting the sub-levels and walkways .

Primary structure girders bonding the 16 trusses together and supporting the sub-floor of the second floor. Since the beams are measured in their inclined position, they are actually wider than the said 4.9 meters. The longest span between support points is about 12.5 meters.

Primary structure girders bonding the 16 trusses together and supporting the sub-floor of the first floor. They are also measured in their inclined position, thus they are actually wider than the said 7 meters. The longest span between support points is about 38 meters.

A sort of zigzag lattice member between two angle bars. Together they form a resistant horizontal section yet let light pass through, all the while maintaining an overall resistance comparable to that of sheet iron. It can be composed of flat bars, angle sections or any other type of bars. The crosspieces have lacing on all four sides.

They function the same way as the lacing, however they are placed as cross bars in wider sections. Their components are attached to the chords and can be attached together where they cross. The 4.9 and 7 meter girders have lattice members between the upper and lower chords. They are arranged in 2 layers.

The four cardinal points of the Tower and the pillars provide the orientation. The four sides in question are designated by the view presented before them :
- Chaillot (the hill),
- Paris (the historic center),
- Grenelle (the neighborhood),
- Champ de Mars (the garden).

The structure of the Tower is divided into 29 numbered panels from the ground up. They are visible on the facade and accented in the openwork sections by the crosspieces forming diagonal crosses. This system of numbering has been in place since the conception of the Tower and is still used today as reference points for operations and maintenance of the monument.

Designated as the "legs" of the Tower, extending from the ground up to the second floor. There are four.

Designated the "feet" of the Tower on which the main pillars are positioned. Also houses the service and technical quarters. They are identified by their cardinal points.

Iron A fibrous iron quality obtained by swirling during the liquid phase. This technique prevents the carbon and the impurities in the metal from associating in the crystallographical structure.

A fastening piece made of mild iron and one of the almost exclusive original framework elements. The rivet is composed of a cylindrical bolt and a semi-spherical head. After turning red in a mobile forging furnace, the bolt is entered into the desired holes and bracketed, also bracketed with the rivet head, which is applied with a special tool. Both are forced together forming a double head. As the bolt cools, it shrinks and thus strongly holds the assembled pieces together.

Sheets of iron or steel of different thickness in which the different forms and dimensions are cut out for the frame. The trusses are composed of assembled sheet metal as well as the chords of the large braces.

The part of the structure (the tower) that extends from the second floor to the very top.

The central tower constructed above the semi-circular beams at the top where the broadcast antennas are based. It is the highest level of the Tower.

The most important primary structure. These large iron tubes assembled in square sections form the framework that holds up the Tower from the ground to the top. Their cross-sectional area (90 cm at the base) and their numbers decrease progressively ascending the Tower. There are four per pillar, thus 4 x 4 = 16, the total from the ground up to the 2nd floor. Higher up the numbers decrease progressively from 12 to 8.

Overhanging projections at the extremities of the large diagonal braces on the two levels of the tower top. There are a total of 8. 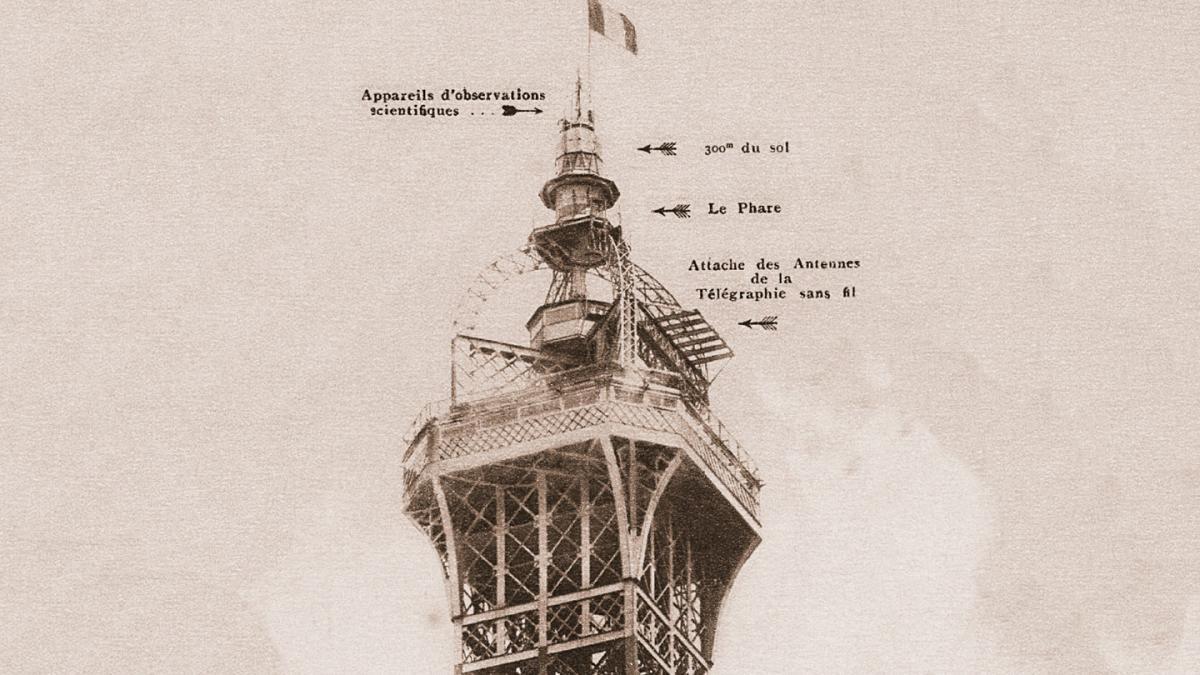